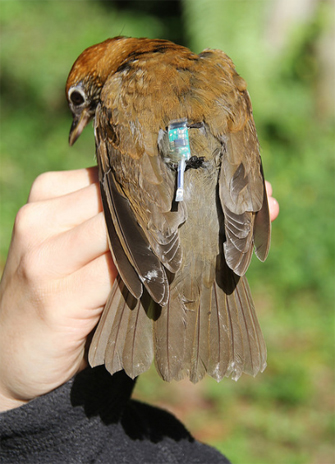 A wood thrush with a geolocator backpack

Juvenile songbirds on spring migration travel from overwintering sites in the tropics to breeding destinations thousands of kilometres away with no prior experience to guide them. Now, a new study out of York University has tracked these “student pilots” on their first long-haul flight and found significant differences between the timing of juvenile migration and that of experienced adults.

“Juveniles departed later from their overwinter sites in Belize and Costa Rica relative to adults, and they became progressively later as they moved northwards because they stopped for more days,” says York U researcher Emily McKinnon, the study’s lead author. “By the time they arrived at breeding sites they were almost two weeks behind the adults, and overall their migration took 50 per cent longer in terms of days spent travelling.”

The study, published today in PLOS ONE, tracked juvenile wood thrushes from Belize and Costa Rica all the way up into the U.S. and Canada. The birds were fitted with tiny geolocator “backpacks” to track their route, and researchers found that even though the juvenile birds took 50 per cent longer to reach their destination, they travelled a similar migration path as their adult counterparts, including the dangerous open-water crossing of the Gulf of Mexico – a non-stop flight covering 1,000 kilometres.

To find out why the young birds were departing at a later time than the adult wood thrushes, researchers compared the health of young birds and adults in late winter in Belize before they departed on migration.

“We found no age-related differences in the condition of the birds, although juvenile birds had shorter wings, which could lead to less efficient flight,” says study co-author Kevin Fraser. “We think the big differences we found in spring migration timing might be a result of an age-related genetic program. If you are an inexperienced young bird, it could actually be better to arrive later at breeding sites if you can’t compete with the adults for territories. Juvenile birds’ late migration could have evolved to help them avoid the worst of the competition for breeding sites in early spring and arrive after the dust has settled and the adults have claimed the best territories. Why risk arriving early if you can’t compete with the adults anyway?”

The researchers say these findings are the first step towards understanding the “black box” of juvenile songbird migration, and point to the dangers that are inherent in a songbird’s first migratory flight.

“Our findings illuminate a little studied part of the life cycle of migratory birds – the development of spring migration behaviour – that has never been examined in the wild before,” says McKinnon. “The 50 per cent longer migration duration for juveniles, combined with a greater number of stopover sites, puts this age class at higher risk of mortality. Since the wood thrush is a threatened species in Canada, and declining throughout its range, a good step in conserving this species would be to identify and protect spring migration stopover sites.”