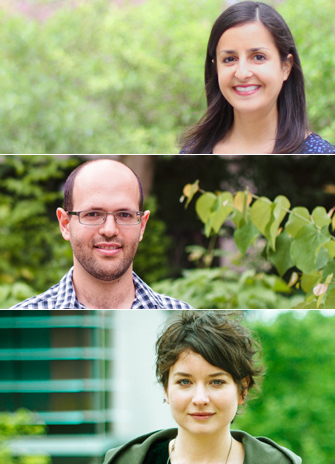 York University PhD students Alexandra Terrana, Oded Haas and Vanessa Fleet have been named recipients of the Vanier Canada Graduate Scholarship, each receiving $50,000 annually for up to three years to support their research. The Vanier is the most prestigious graduate scholarship offered in Canada and recipients are selected based on their leadership and high standard of scholarly achievement in doctoral studies.

“I want to congratulate our Vanier recipients on their outstanding personal achievements, and also to thank them for the maintenance of a vibrant intellectual environment at York,” says Barbara Crow, dean of the Faculty of Graduate Studies.

Terrana works in the field of theoretical cosmology, studying mathematical models used to describe the evolution of the universe on the largest scales. “My current project aims to determine the cosmological implications of modifying our current theory of gravitation in the hopes of solving some of the major outstanding mysteries in modern physics, such as dark energy,” she says.

Terrana notes that while Albert Einstein’s theory of general relativity is widely accepted as the correct theory of gravity, it is known to have problems describing the universe on very large scales.

“To make the theory match our observations, physicists need to invoke hypothetical dark matter and energy components that must make up 96 per cent of our universe,” she says. “After decades of dedication towards understanding this dark sector, it largely remains a mystery. An exciting direction of research that aims to solve this puzzle is to modify our theory of gravity so that we can accurately model the universe without dark matter or dark energy.”

As the new theory must be mathematically consistent, and be able to describe all of the physical phenomena we observe, this will prove to be a large challenge. Terrana notes that “massive gravity” is one of the most successful attempts to modify gravity to date, but a lot is unknown about its predictions for time-dependent phenomena such as gravitational collapse.

The hope is that by analyzing the time-dependent equations in massive gravity, it will determine the ultimate viability of the theory as a description of nature.

Haas’s proposed thesis – Housing, ethnocracy, and the right to the city: Re-imagining housing as space for inclusion, from Israeli ‘mixed cities’ to Toronto mixed-income projects – is an interdisciplinary project that combines critical urban theory, planning and architecture to examine the potential of public housing policy and design to alleviate ethnically conflicted urban areas. By comparing housing policy and design in Israel and Canada, Haas’s research looks at the planning and distribution of housing as fraught practices, with significant social, cultural and political consequences.

Hailing from Israel where he studied architecture and completed a master’s degree in an interdisciplinary program in the arts, Haas notes that being a volunteer in a public housing campaign during the country’s 2011 protests inspired his research a great deal.

“The goal of my research is to shift the focus of housing discourse, policy and practice from affordability to effectively negotiating difference,” he says. “Ultimately, I seek to broaden the understanding of housing as a powerful tool in resolving urban conflicts, and re-define the role of housing policy and design as means for inclusion.”

Fleet’s research situates the process of creating and collecting landscape images against the social, technological and political forces that shaped the visual touchstones of France’s cultural memory in the mid-19th century.

“At a historical moment when we are increasingly flooded by visual information, it is important to understand how photography became elevated as a technology with which we mediate the world around us, and through which we reflect on notions of culture and national identity,” she says.

Fleet notes that understanding the social, technological and political frameworks developed for creating and collecting landscape images raises fascinating new questions about the cultural field in which photography circulates today – including issues surrounding its institutional function and display.

Fleet’s project aligns with the work of her supervisor, York fine arts Professor Sarah Parsons, and her research in the history of photography and visual culture.

Launched in 2009 to help retain word-class doctoral students, the scholarship helps position Canada as a global centre of excellence in research.

The Vanier Canada Graduate Scholarships are available to both Canadian and international PhD students studying at Canadian universities.