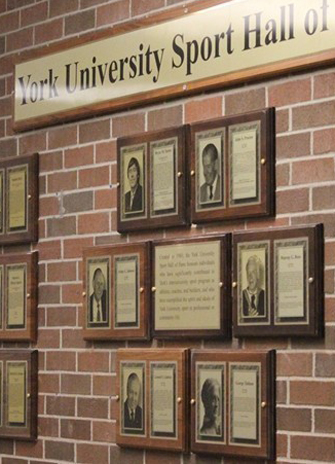 York University Sport & Recreation and the School of Kinesiology and Health Science will welcome five new inductees to the York University Sport Hall of Fame at the annual dinner and ceremony on Friday, Sept. 19. Four former student-athletes and one builder will be inducted in 2014. This year’s inductees are: football player and track and field standout Andre Batson; hockey and soccer player Allyson Fox; track and field athlete Andrea (Hastick) Brown; wrestler Paul Hughes; and Steve Dranitsaris, a longtime York employee who will be inducted in the builder category.

Andre Batson (BSc ’98) was a tremendous two-sport student athlete at York University, starring on the football and track and field teams in his five seasons (1993 to 1998). He is the greatest receiver ever to suit up for the football squad, earning more individual awards than any other player in program history and ranking first or second in every major statistical category for his position, including as the all-time leader in receiving yards (2186) and total touchdowns (26). He is also York University’s all-time leader in career punt returns (106), punt return yards (1460), kick-off returns (75) and kick-off return yards (1444). He was a two-time Canadian Interuniversity Athletic Union (CIAU) first-team all-Canadian, a four-time Ontario University Athletic Association (OUAA) all-star and the conference rookie of the year in 1993. He was also a relay specialist for the track and field team, winning two OUAA gold medals and a pair of CIAU bronze medals in the 4 by 200 metre and 4 by 400 metre relays in 1996, and helping the team to a second-place finish at the OUAA championships. Batson was named York’s male athlete of the year that same season and was selected in the fifth round (34th overall) by the Saskatchewan Roughriders in the 1997 Canadian Football League draft.

Allyson Fox (BSc ’98, LLB ’01) played on both the hockey and soccer teams in her five seasons at York (1993 to 1998). Playing both centre and defence for the hockey team, she led the squad to its most recent Ontario Women’s Interuniversity Athletic Association (OWIAA) gold medal in 1997, just the third title in program history, and was a three-time conference all-star, including once on the first team in the championship season. She was also a defender for the soccer team and earned OWIAA first-team all-star honours in 1996. Fox, who was a captain or assistant captain for both teams for four years, went on to a long career in the Canadian Women’s Hockey League (CWHL) where she was one of its co-founders.

Andrea (Hastick) Brown (BA ’91) had an illustrious four-year career with the York track and field team (1987 to 1991), helping the program win two OWIAA banners and two CIAU championships (1988, 1990), as well as a pair of OWIAA silver medals (1989, 1991) and a national bronze (1991). She was crowned the CIAU triple jump champion in 1991, earning first-team all-Canadian honours, and also won a national gold medal in the 4 by 200 metre relay in 1990. At the conference level she won nine OWIAA medals – five golds, three silvers and one bronze in the long jump, triple jump and relays – and was named an all-star seven times. Brown and her son Jameel became the first parent-child duo to win national championships at York University when Brown helped the Lions claim the CIS men’s title in 2014.

Paul Hughes (BA ’90) was a top wrestler on the best teams the York wrestling program has ever fielded. He helped the squad win its first-ever CIAU championship (1989) and its only two OUAA titles (1987, 1989), and he was also part of the teams that finished second at the national tournament (1987) and third at the conference championships (1986). He was twice crowned the CIAU champion in his weight class, in the 68-kilogram division in 1989 and the 61-kilogram class in 1986, as part of the four individual national medals he won while at York, also claiming a silver (1987) and a bronze (1985). He also won two individual OUAA gold medals, and throughout his career he was a three-time CIAU all-Canadian, a two-time OUAA all-star and earned York’s male athlete of the year award in 1987. Hughes also represented Canada internationally, winning the gold medal at the 1986 Commonwealth Games in Edinburgh, Scotland.

Steve Dranitsaris (BA ’73), regarded by many as one of York’s biggest cheerleaders, had a career in administration at York that spanned more than four decades (1973 to 2014). Known as someone who could lead, influence and generally make things happen, he held a number of progressively responsible positions in Stong College, Alumni Affairs, Private Funding, Kinesiology & Health Science and the Office of the Vice-President Finance and Administration. Throughout his career, he contributed to Sport & Recreation in many ways, including the creation of the Hall of Fame, advancing the varsity alumni concept and initiating and raising more than $1.5 million for the awards and scholarships program, as well as his involvement in improving York University’s sport and recreational facilities – the York Student Field House, York Stadium, the Ice Gardens, the Tait McKenzie Fitness Centre expansion, the Pan American athletics stadium and upgrading many indoor and outdoor varsity facilities. His volunteer contributions to York over the years have been significant and numerous, including leadership roles in sport clubs, inter-college athletics, the staff and faculty golf tournament, the University’s Alumni Association and the staging of York’s first homecoming in 1978.

Created in 1980, the Sport Hall of Fame honours individuals who have significantly contributed to York’s interuniversity sport program as athletes, coaches and administrators, and who have exemplified the spirit and ideals of York University sports in their professional and community lives. The selection committee consisted of varsity alumni, current student-athletes and several University administrators.

The Hall of Fame Dinner and Induction Ceremony will take place at Paradise Banquet Hall, 7601 Jane Street in Vaughan, Ont. For more information on the event, contact Kim Servinis at 416-736-5982 or mathoney@yorku.ca.