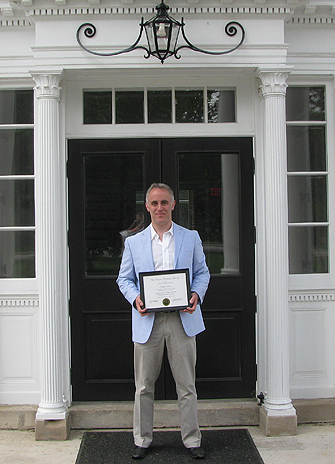 York history and geography Professor William Jenkins’ book Between Raid and Rebellion has picked up three awards this year – the Clio Prize, the Joseph Brant Award and the James S. Donnelly, Sr. Prize.

The first of the trio of prizes for Between Raid and Rebellion: The Irish in Buffalo and Toronto, 1867-1916 (McGill-Queen’s University Press, 2013) came earlier this year. The Canadian Historical Association awarded Jenkins the annual Clio Prize for Ontario, which recognizes significant regional history publications. The award citation calls it “a work of remarkable complexity,” one that is “firmly-rooted in the historical scholarship of both the Irish diaspora and Canadian and American politics.… the subtlety and thoroughness of the argument and the skill of the author as a writer provide a richly nuanced study which accounts for national and transnational influences and for the power of geography as a vital historical determinant.”

It was quickly followed by the James S. Donnelly, Sr. Prize for books on history and social sciences, sponsored by the American Conference for Irish Studies.

The hat trick was the Ontario Historical Society’s (OHS’s) Joseph Brant Award which recognizes the best book on multicultural history in the province published in the past three years. Ian Radforth, chair of the Honours and Awards Committee of the OHS, calls the book a “ground-breaking study.”

The OHS award citation reads: “This is a masterful and authoritative history based on impressive research. Informed by scholarship in the social sciences, particularly historical geography, the book also succeeds at story-telling, bringing to life the struggles and conflicts of Irish newcomers as they found a place, crafted identities, and helped build Toronto.”

Jenkins says winning the awards was satisfying and encouraging. “It was a great shot in the arm to receive at the end of a research and writing process that took several years. I’ve felt both thrilled and humbled to have received awards from both the history and Irish studies communities on both sides of the border.”

He added that “If people appreciate the way you have put a story together and learn something new from it, there’s not much more you can ask for.”

Between Raid and Rebellion compares the lives and allegiances of Irish immigrants and their descendants in Toronto and Buffalo during a 50-year period between the era of the Fenian raids and the 1916 Easter Rising.

Highlighting the significance of immigrants from the northern Irish province of Ulster to Toronto and the southern province of Munster to Buffalo, Jenkins distinguishes what it meant to be Irish in a loyal dominion within Britain’s empire and in a republic whose self-confidence knew no bounds. He pays close attention to the transformations that occurred within the Irish communities, including residential patterns, social mobility and political attitudes, as well as their experiences in workplaces, homes, churches and meeting halls. Although the Irish acclimated to life in their new world cities, their sense of feeling Irish did not fade to the degree so often assumed.