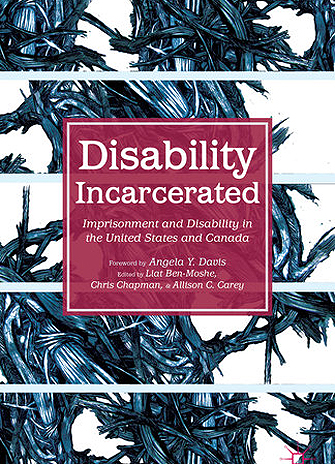 Published by Palgrave Macmillan, Disability Incarcerated: Imprisonment and Disability in the United States and Canada is a collection of interdisciplinary papers examining the incarceration and segregation of people with disabilities in North America.

Professor Liat Ben-Moshe of the University of Toledo’s disability studies program and sociology Professor Allison C. Carey of Shippensburg University co-edit the book with Chapman, a professor in York’s Faculty of Liberal Arts and Professional Studies.

“We highlight connections among various sites of confinement and institutionalization with a particular attention to disability and its relevance to these diverse sites,…” write Chapman, Ben-Moshe and Carey in the book’s preface. “We suggest that disability has always been central to diverse practices of incarceration, alongside and interlocking with other forms of stratification. We do not claim that the diverse internments considered in this book are all the same; we believe, rather, that fruitful analysis emerges from considering both the similarities and the differences among diverse sites of confinement….”

Chapman wrote the chapter “Five Centuries’ Material Reforms and Ethical Reformulations of Social Elimination” and co-wrote “Reconsidering Confinement: Interlocking Locations and Logics of Incarceration” with Carey and Ben-Moshe. In the former, he begins by considering the almost simultaneous emergence of institutions for intellectually disabled people and the residential school system in Canada. “… I was surprised to find that North American timelines of the educationally oriented confinement of intellectually disabled people and of the Indian Residential School system mapped neatly onto one another. In the 1840s, both systems emerged, and their abolitions both began in the 1960s. What can be made of this?”

“Disability Incarcerated is an exciting development at the intersection of the fields of critical prison studies and disability studies. The anthology not only represents important scholarly work in these fields, but it also stages conversations across numerous borders, including the one separating the United States and Canada and those that strive to divorce scholarship and activism,” writes Davis in the book’s foreword.

“The chapters in this collection do not simply seek to identify points of convergence of race, gender, class, sexuality, and disability within the framework of historically developing modes of incarceration. Rather they also aim to transform entrenched ways of conceptualizing imprisonment. They point out that carceral practices are so deeply embedded in the history of disability that it is effectively impossible to understand incarceration without attending to the confinement of disabled people.”

The book has several York contributors, including critical disability studies Professor Geoffrey Reaume who wrote the chapter “Eugenics Incarceration and Expulsion: Daniel G. and Andrew T.’s Deportation from 1928 Toronto, Canada.” Syrus Marcus Ware, who will begin his PhD in environmental studies at York in September, co-authored “It Can’t be Fixed Because It’s Not Broken: Racism and Disability in the Prison Industrial Complex” with Joan Ruzsa and Giselle Dias. York alumna Katie Aubrecht (MA ’07) co-wrote “Chemical Constraint: Experiences of Psychiatric Coercion, Restraint, and Detention as Carceratory Techniques” with Erick Fabris.

Chapman’s research revolves around the histories, rationales and practices of the “helping professions” by mobilizing perspectives of those who have been subjected to them, drawing on disability studies, critical race theory, anti-colonial studies, prison abolitionist, anti-capitalist, queer and feminist critiques of social services.