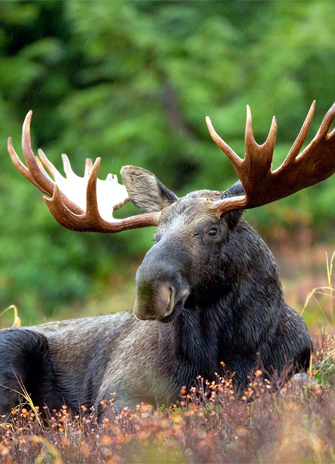 “Plants have evolved defense mechanisms to protect themselves, such as thorns, bitter-tasting berries and, in the case of certain types of grass, by harbouring toxic fungus deep within them that can be dangerous or even fatal for grazing animals,” says York biology Professor Dawn Bazely, who worked with University of Cambridge researcher Andrew Tanentzap and York researcher Mark Vicari on the project. “We wanted to find out how moose were able to eat such large quantities of this grass without negative effects.”

Inspired by an earlier study that showed that moose grazing and saliva distribution can have a positive effect on plant growth, the research team set out to test an interesting hypothesis – whether moose saliva may, in fact, “detoxify” the grass before it is eaten.

Working in partnership with the Toronto Zoo, the team collected saliva samples from moose and reindeer, which they then smeared onto clipped samples of red fescue grass carrying the toxic fungus, simulating the effect of grazing. They found that the application of saliva produced rapid results, inhibiting fungus growth within 12 to 36 hours.

“We found that the saliva worked very quickly in slowing the growth of the fungus and the fungus colonies,” says Bazely. “In addition, by applying multiple applications of saliva to the grass over the course of two months, we found we could lower the concentration of ergovaline between 41 and 70 per cent.”

Bazely says that because moose tend to graze within a defined home range, it’s possible that certain groups of plants are receiving repeated exposure to the moose saliva, which over time has resulted in fewer toxins within their preferred area.

“We know that animals can remember if certain plants have made them feel ill, and they may avoid these plants in future,” says Bazely. “This study is the first evidence, to our knowledge, of herbivore salvia being shown to ‘fight back’ and slow down the growth of the fungus.”