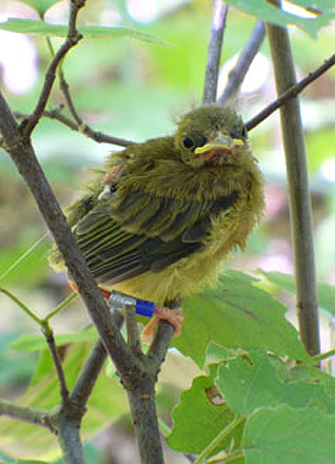 Migratory songbirds are disappearing, and though conservationists are examining several possible reasons such as climate change, loss of habitat, acid rain and light pollution, a key piece of the puzzle has remained missing: where do these birds go once they leave their breeding sites, and what threats may they be encountering along the way?

To answer this question, a team of researchers out of York University have created the first ever migratory connectivity map produced for a songbird, using tracking from both breeding and winter sites. They were able to trace the 4,000-kilometre route taken by wood thrushes from North America down to Central and South America using bird “backpacks,” tiny geolocators made up of a battery, clock, light sensor and chip to record data.

“The most challenging thing about these tiny geolocators is that they do not transmit data,” says York University researcher Emily McKinnon. “This means that we put the backpack on the bird, it migrates thousands of kilometres south for the winter, migrates back in spring, and then we have to catch it again to get the data. The culmination of years of this type of tracking, and hours and hours of effort by graduate students, field techs, volunteers, collaborators and of course our project leader, Dr. Bridget Stutchbury, is detailed migration data from more than 100 wood thrushes tracked from seven breeding sites and four winter sites.”

The team discovered that wood thrushes from Canada don’t migrate to the same areas as their neighbours in Kentucky, Virginia and the Carolinas, and, in fact, have a longer migratory route than their southern counterparts.

“Overall, we call this pattern ‘leap-frog’ because the birds breeding the farthest north actually migrate the farthest south, ‘leap-frogging’ over the southern breeding populations,” says McKinnon. “The connections also tended to be predicted by longitude so that birds breeding further east (and north) spent the winter further east (and south). So if you are Canadian visiting the Mexican Maya Riviera on vacation and you see a few wood thrushes, odds are they are not ‘Canadian’ wood thrushes, but probably birds from the southern U.S.”

McKinnon says the map shows where each bird goes and what route it takes to get there, revealing patterns of behaviour that will help researchers pinpoint important areas for specific breeding populations. It also reveals that in spring almost 75 per cent of all wood thrushes cross the Gulf of Mexico from the tip of the Yucatan Peninsula to land in a small area of Louisiana on the northern Gulf Coast. That means almost the entire global population of the bird uses that one small area of land near New Orleans every spring.

McKinnon says the map will be helpful to researchers because they will be able to identify and target specific areas for habitat protection. For example, knowing that Canadian wood thrushes overwinter in Nicaragua means that efforts can be made to promote focused conservation in this region, including shade coffee grown under a forest canopy.

“The truth is, they aren’t really Canadian wood thrushes after all,” says McKinnon. “They have dual citizenship!”