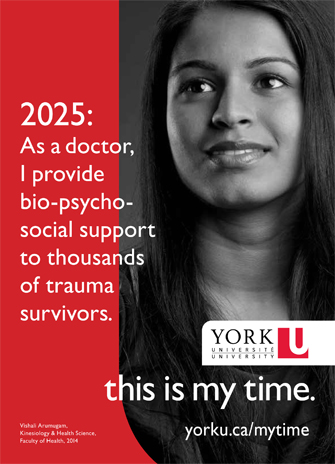 York University’s “this is my time” campaign won silver for Best Student Recruitment Initiative in the 2014 Canadian Council for the Advancement of Education (CCAE) Prix D’Excellence Awards.

The prize celebrates phase two of the campaign, which was focused on elevating reputation and supporting recruitment. It comes months after winning five Accolades Awards from the North American Council for Advancement and Support of Education (CASE), District II, (see YFile Feb. 10) and one creative Summit International Award in 2013.

“The goal of the campaign is to enhance the University’s reputation and increase the number of students who make York their first choice,” says Susan Webb, chief communications and marketing officer. “Our external research is showing that our audiences find the campaign inspiring and that it is shifting perceptions about York in a positive way.”

“This latest award comes just as the campaign is entering its third year with no signs of slowing down,” adds Robin Edmison, associate director of Marketing and Creative Services. “The momentum just keeps building. This fall, the ‘this is my time’ campaign will feature a new roster of inspiring students, alumni and professors – the best of what York University has to offer.”

The campaign, which introduced an unconventional twist on testimonials by featuring current York students sharing their visions, was first launched in September 2012. Phase two of the campaign showcased visionary faculty and successful alumni who are making an impact on society as proof of academic excellence and student success achieved through a York University degree.

The integrated campaign included TV, cinema and online, as well as on-campus elements such as building wraps and York U shuttle bus wraps. Stay tuned for more inspiring visions coming your way this fall.

To find out more, visit the this is my time website.