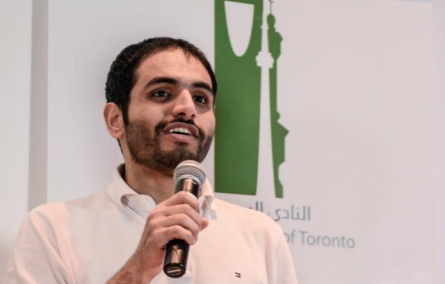 Lassonde digital media program grad Ahmad Aseeri has been named as the 2014 recipient of the Bergeron Medal of Distinction. Aseeri, who hails from Saudi Arabia, is an international student who has excelled academically.

Aseeri was awarded the Bergeron Medal of Distinction during the Lassonde School of Engineering convocation ceremony on Friday, June 13, at York University. He was selected to receive the award because of his entrepreneurial talent and his determination to change the world with the knowledge he has acquired with his BA (Hons.) degree in digital media from York University.

“We are thrilled that he’s decided to continue his studies in digital media and we hope he’ll rejoin us here in the future as a professor or an entrepreneur-in-residence,” added Kozinski.

“Words cannot adequately describe how I feel about the honour of receiving the Bergeron Medal of Distinction,” said Aseeri. “This award will make me work harder, dream bigger and give me the confidence to face all the challenges ahead. My sincere thanks go to those who believe in my talent and continue to inspire me to help change the lives of others in my future career.”

Aseeri has established his own startup enterprise Aseeri Media, a motion picture production company dedicated to producing innovative digital commercial productions, feature visual effects and short films. His vision is to become a leader in the digital media industry and contribute to the development of his home nation to become a technology maker as well as a technology user.

The next chapter in his life journey will take him to Canada’s west coast where he’ll join the graduate program in digital media at Simon Fraser University.

He intends to be an entrepreneurial academic, eventually earning a PhD in the field, combining advanced education with launching startup ventures in the digital media realm.

During his time as an undergraduate, Aseeri found time to be the founder and leader of the Saudi Students Club at York University and communications director at the Saudi Centre of Canada.

Prior to starting his program, Aseeri took a language course in English at York University (he’s now fluent) and studied for a diploma in programming from Abha Technology College.

The Lassonde School of Engineering will be welcoming Aseeri’s brother in the fall as he begins his studies in mechanical engineering.