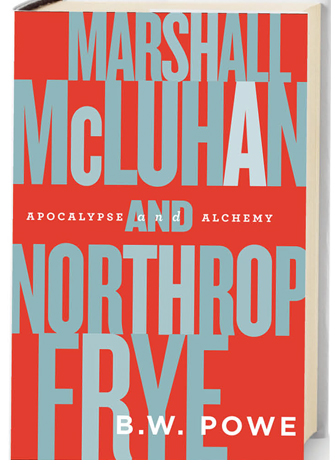 Like the two-headed Roman god Janus, Marshall McLuhan and Northrop Frye toiled together yet separately, within the same institution, forging new ways to think about emerging technologies, media, culture and literature. They often disagreed. But to York University English Professor B.W. Powe, a student of them both, they represent two sides of the coin of brilliance and he can’t help wonder if they saw that in each other.

Few authors have placed the men side by side as Powe has done in his new book, Marshall McLuhan and Northrop Frye: Apocalypse and Alchemy (University of Toronto Press). It is here that Powe explores not only their eruptions of conflict – intellectual, academic and personal – but also their similarities, harmonies and lasting influence. He examines the parallels, interweaving and disparateness of their work and personal lives.

“McLuhan and Frye were two teachers who were also visionaries, guides to media awareness and to the deep structure of literature; they were prophetic figures who worked side by side from 1946 until 1980 in the Department of English at the University of Toronto . . . where they made us see reality in different ways and changed our perceptions,” says Powe. “They initiated a highly original Canadian visionary stream, one which highlights media ecology and the identity DNA at the heart of literature.”

McLuhan taught how to engage in the hyper-shifting environments of evolving technologies. “We remake the world through our technologies, and these in turn remake and extend us, in ever spiraling lattices of complexity. McLuhan uncannily foresaw the future, where electronic technology would shape and expand cultures and societies into a global membrane of communications,” says Powe.

Frye, on the other hand, taught how to “look inside the sprawl of seemingly unrelated literary works and see the structures, the codes, that are at play, unifying our vision into one which transforms the consciousness of the reader.” It is through literature that the eternal quest to know “who am I” is explored.

And that sparks the question Powe asks in the book: “What happens if we combine ‘the medium is the message’ with the Great Code?”

Through interviews, letters, notebooks and their published texts, Powe offers a new alchemy of their thought, a new vision or synergy in their thinking. They were, despite their conflicts, complementary figures. McLuhan is what Powe calls the orator and jokester of the media, while Frye is the essayist and theorist of literary unity. “One scanned and filtered the impressions and traces of electric media; one exalted the solitude of study.”

A poet, novelist, essayist and philosopher, Powe wanted not only to evoke and describe, reveal and appreciate the two men’s hidden dialogues and debates, and their sometimes distempered opposition to each other’s ideas, but also to honour them.

“Communication becoming communion: this is the bridge between McLuhan and Frye. Their sense of necessity was not only intellectual; it was a powerful longing,” writes Powe. “They were moved by maelstroms and mazes, by the desire to ascend and sometimes to descend the ladders of perception. Heightened consciousness, expanding eyes: they take us to revelatory cusps where we are asked to look up, look down, listen deeply, touch the pulse in the flow of our time.”

Both have deeply shaped Canadian literary heritage and continue to be influential in ways Powe says aren’t always recognized by writers and readers. His hope is that Marshall McLuhan and Northrop Frye: Apocalypse and Alchemy will spark a dialogue about these two pivotal thinkers; that readers will be amused and inspired. That they will experience the passion of engaging these two forces as they create a distinct Canadian visionary lineage that requests people change how they perceive reality.

Their words still, he says, “carry sensational relevance now,” leaving room that there will continue to be a growing delight in recognizing the codes of enlightenment that McLuhan and Frye left behind.

“Their primary gift,” writes Powe, “was their attempt to provide ways to let us soar.”

Barry Callaghan, editor-in-chief of Exile: The Literary Quarterly, calls the book “An entirely fresh view of McLuhan and Frye, the great Orator and the great Theorist, as exuberant visionaries who breached the future in tandem during their years teaching at the University of Toronto.” He describes Powe’s scholarship as “marked by a distinctive ease and clarity of style rooted in a rigorous reading of all the pertinent texts.”

It is also for Powe a deeply personal book, a farewell of sorts to the two men whose presence and ideas have consumed much of his life’s work to date. As Powe says, it is time to move on and explore different landscapes.

Before leaving it all behind, however, Powe is performing a literary encore as one of the contributors to the forthcoming book The Medium is the Muse (Channeling Marshall McLuhan (NeoPoiesis Press), edited by Lance Strate and Adeena Karasick, both professors of communication and media studies at Fordham University. Powe’s contribution is a “hallucinatory poem on Steve Jobs called ‘Technogenie.’ ”

The book is a diverse collection that brings together 29 poets, writers and artists who channel McLuhan as both medium and muse. Like McLuhan’s work, this volume promises to delight, divert, provoke, incite and inspire readers to channel McLuhan in their own imagination and creative endeavors. Oracle of the electronic age, Marshall McLuhan believed artists could wake us and offer new windows into the world.

Powe’s forthcoming work will also include a book of parables, fragments, tales and aphorisms called Where Seas and Fables Meet, to be published by Guernica in March 2015. He is also immersed in writing a new book, Universal Andalucia, about his experiences in Spain, where he has been visiting off and on for three years. He is there again this summer at IN3, Digital Culture, the University of Catalunya, lecturing on his new book and continuing to work on Opening Time: On the Energy Threshold (see YFile, July 31, 2013).