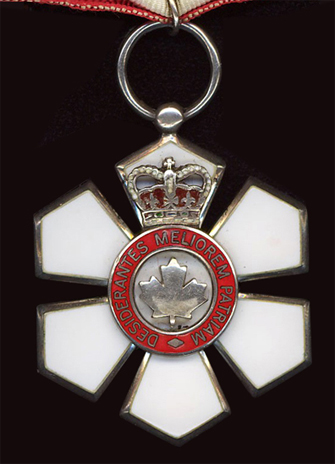 The Member of the Order of Canada medal

York University Distinguished Research Professor Marcia Rioux has been appointed a member of the Order of Canada in recognition of her scholarship in the field of social justice and for her advancement of the rights of persons with disabilities.

The announcement of Rioux’s induction was made June 30 by Governor General and Commander-in-Chief of Canada David Johnston. Appointment to the Order of Canada is one of Canada’s highest civilian honours. Rioux will be invited to a ceremony to accept her insignia at a later date.

Rioux, a professor in the School of Health Policy and Management in York’s Faculty of Health, is co-director of Disability Rights Promotion International, a multi-year project to monitor disability rights nationally and internationally. She founded the master’s and doctoral programs in Critical Disability Studies at York University and is director of the York Institute of Health Research. Rioux has also been an adviser to federal and provincial commissions, parliamentary committees and international NGOs, as well as United Nations agencies. Earlier this year, Rioux was presented with the Lieutenant Governor’s Community Volunteer Award by David Onley, then lieutenant governor of Ontario, in recognition of outstanding contributions to Ontario communities.

More about the Order of Canada

Established in 1967 by Her Majesty Queen Elizabeth II, the Order of Canada is the cornerstone of the Canadian Honours System, and recognizes outstanding achievement, dedication to the community and service to the nation. The Order recognizes people in all sectors of Canadian society. Their contributions are varied, yet they have all enriched the lives of others and made a difference to this country.

The Order of Canada’s motto is DESIDERANTES MELIOREM PATRIAM (They desire a better country). Her Majesty The Queen is the Sovereign of the Order, and the governor general is the chancellor and Principal Companion of the Order.

The insignia of the Order is a stylized snowflake of six points, with a red annulus at its centre, which bears a stylized maple leaf circumscribed with the motto of the Order, DESIDERANTES MELIOREM PATRIAM (They desire a better country), surmounted by St. Edward’s Crown.

All Canadians are eligible for the Order of Canada, with the exception of federal and provincial politicians and judges while in office. The Order’s constitution permits non-Canadians to be considered for honorary appointments. Members of the Royal Family, governors general and their spouses are appointed in the extraordinary category. There are no posthumous appointments. Officers and members may be elevated within the Order in recognition of further achievement, based on continued exceptional or extraordinary service to Canada. Usually, promotions are considered five years after the first appointment.