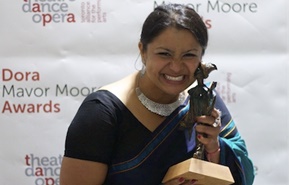 Among the highlights, York University was well represented in Sultans of the Street, winner of Outstanding New Play in the Theatre for Young Audiences Division.

“It was terrifying to put a piece of your soul out there, but I’m so grateful to have my people’s story on stage and to work with the people I worked with,” Roy said.

This was Roy’s fourth Dora win. The award-winning playwright and actor said she never doubted her ability to work professionally in theatre.

“When I didn’t get into acting, I cried and cried. I was devastated. But I’ve been performing and acting since I was five years old; I knew I would get here,” she said.

Doyle, who picked up his first Dora Award for outstanding individual performance in Sultans, credited Roy for creating a “pretty special play” for young audiences.

“I badly wanted to work with this group of people – it was a very special night for York grads at the awards ceremony,” he said. “Acting for young audiences is the most political theatre, arguably. If you are not good, they’ll tell you.”

A busy actor, producer and writer, Doyle said the training he received at York University has served as a solid foundation for his accomplishments. His class of 12 people at the time consisted of talented personalities who are now successful on television or in theatre. Among them, Hollywood actress Rachel McAdams.

“York was a very special time and place for me,” Doyle said. “Every one of my classmates played an important part of my education at York – we are all still very close.”

Aside from celebrating with colleagues and former Yorkies who worked on Sultans, Ramsay, a veteran lighting designer, won her fifth Dora in the Independent Theatre Division for Sister Mary’s a Dyke?!, a comedic drama about a young girl’s journey as she uncovers the truth about her all-girls Catholic boarding school. She was also nominated in the same category for The Wanderers, an epic tale of a family transplanted from war-torn Afghanistan.

“Lighting design is an amazing part of theatre. It changes your emotion without you even knowing why or how,” Ramsay said.

Even though she has been working in theatre since she was teenager, Ramsay didn’t become a full-time designer until about 10 years ago.

“I made a lot of amazing contacts at York,” she said. “My advice to new grads is to get out there and see as much as you can and volunteer. My first 10 gigs were not paid, but it got my name out there.”