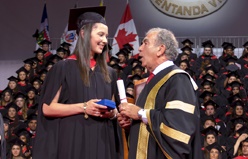 While hundreds of graduate students received their degrees during Spring Convocation ceremonies last month, only one had the distinction of being top of their class.

Aidan Moir, a recent MA graduate in Communication and Culture, received the Governor General’s Gold Academic Medal at York’s convocation ceremony on Tuesday, June 17 as the graduate student with the highest academic standing.

“I really was overwhelmed with so many emotions, and it will always be a very special moment,” she says. “Having completed my previous degrees at York, this honour means even more to me since the faculty, opportunities and resources provided by York helped inspire — and continues to do so — my growth and development as a student.”

Lord Dufferin, Canada’s third Governor General after Confederation, created the Academic Medals in 1873 to encourage academic excellence across the nation. Over the years, they have become the most prestigious award that students in Canadian schools can receive. Medals are presented on behalf of the Governor General by participating educational institutions, along with personalized certificates signed by the Governor General. There is no monetary award associated with the medal.

Moir’s thesis, titled Transient Vogue: The Commodification and Spectacle of the Vagrant Other, concentrated on the fashion trend of homeless chic, which refers to individuals from middle class backgrounds experimenting with styles and artifacts stereotypically characteristic of a lower class identity.

“I interrogated how the narratives, imagery, and symbolism of this trend circulates in our visual culture,” she says. “While the recent economic recession influenced the production of a wide variety of ‘homeless chic’ examples, the trend represents a complex history that is often decontextualized or ignored.”

Moir notes her work helps demonstrate how deeply entrenched fashion is within our cultural politics, not only as an everyday practice or custom, but also as a social institution.

She is currently pursuing a PhD in Communication and Culture at York University to further her research by comparatively examining the similarities and differences between fashion and other social institutions, specifically politics and religion. “I’m interested in how tactics of branding are increasingly utilized to construct personas and identities within fashion, politics, and religion, and the potential implications this poses for iconography and the ways in which we think about public identities, style, and the institutions that play a central role in our daily lives.”

Moir presented well wishes to the many people in her life who helped her achieve this great honour. “The advice, motivation, encouragement, and dedication of my supervisor continues to be instrumental to my success, and I would be lost without the support of my family,” she says.