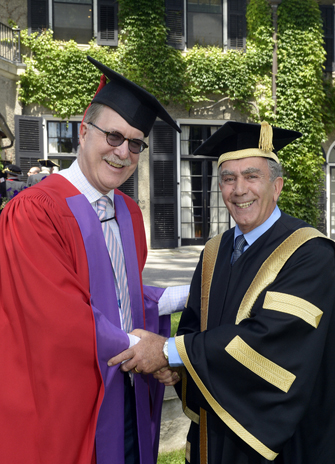 Graham Fraser told graduating students at York’s Glendon College that as they stand on the brink of a new phase of life, not only should they strive to keep their second language, but they should understand that bilingualism is a leadership skill.

Fraser, Canada’s commissioner of official languages, was at Glendon to receive an honorary doctor of laws degree from York  on June 21 during Spring Convocation ceremonies. A well-known and respected journalist, Fraser has reported in both official languages on issues affecting Canada and Canadians.

He knows first-hand the importance of bilingualism and how difficult it is to keep or improve upon that second language. “It is harder than it looks,” he said. “Speaking and understanding a language is not just an intellectual skill, it is a physical one. Just as an athlete who stops practising and stops working out will get flabby and out of shape, someone who stops using a language will lose it. But the rewards for doing so are amazing.”

The rewards he spoke about were not monetary, however, even though statistics show bilingual people earn more than the unilingual. He was talking about the excitement and the sense of discovery that comes from exploring another culture.

“If you have learned English or French, you have access to extraordinarily vibrant cultural, social and political societies,” said Fraser. “The very process of learning your second or third language will expand your horizons, improve your social and interpersonal skills and give you a new perspective.”

He learned this lesson at the age of 19 working on an archeological dig in Montreal where the language of work was French. He struggled to adequately communicate in that language. A bilingual fellow student remarked that he was very different in French.

“Of course I am different. I am stupid, I am inarticulate and I have no sense of humour,” he said. In saying that he “realized that this was the immigrant experience: coming to a new society and learning the language and the customs, but unable to learn as quickly, express intelligent thoughts or get the jokes. So in learning French, I not only learned about my country, but also developed a new sensitivity to immigration and cultural diversity.”

Fraser also advised graduands to keep in touch with the friends they’ve made in university. While many say university is the best years of a person’s life, Fraser begged to differ. For those whom that sentiment holds true for “it often means that the result is disappointment and bitter nostalgia. What is true, however, is that it is a period in your life when you can make friends and spend almost unlimited amounts of time with them. Keep them. Make the effort to keep in touch.”

The author of five books, including Sorry, I Don’t Speak French (2006) and PQ: René Lévesque and the Parti Québécois in Power, which was nominated for the Governor General’s Literary Award for Non-Fiction in 1984, Fraser also told the audience about his experience of being fired because he had written a piece that seemed to go against the ideology of the publication he was working for at the time. That experience taught him much.

“So I learned to be more aware of my work environment, more sensitive to what was going on around me, more understanding of those who were in trouble and didn’t know it,” he said. “Know that your failures will be as important and as valuable as your successes.”