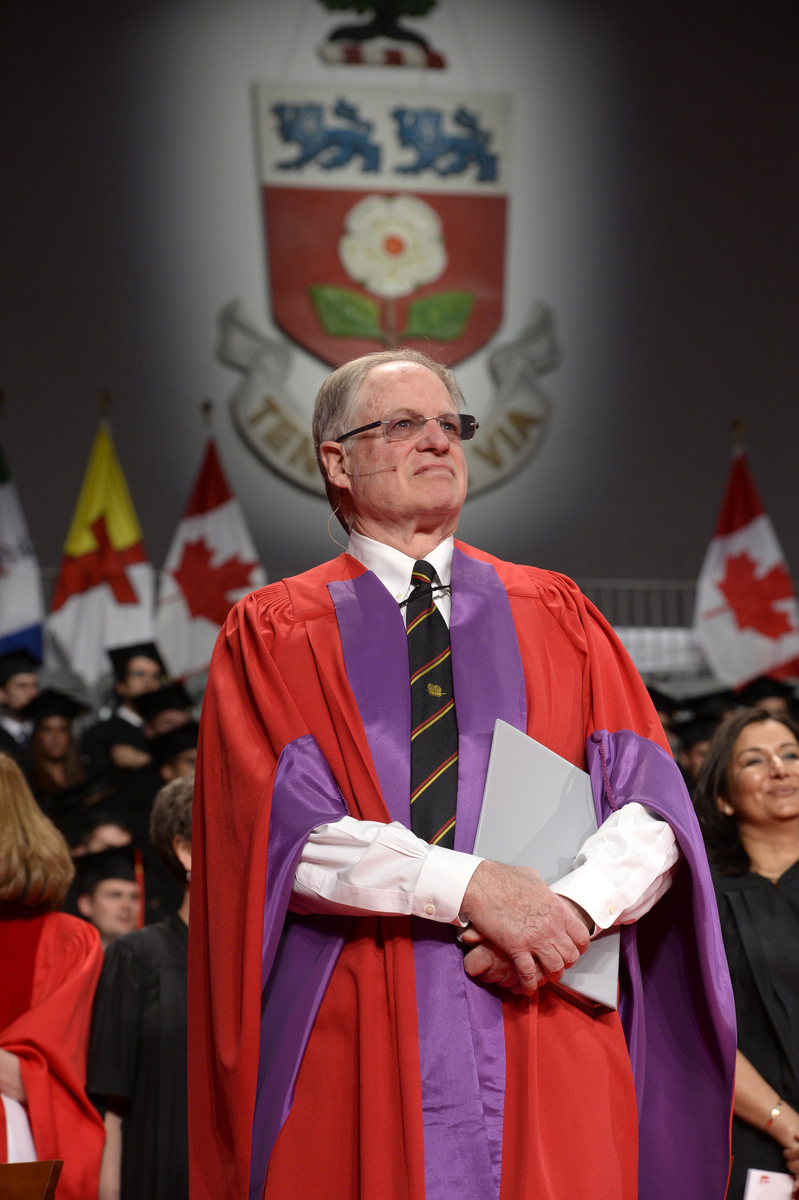 Stuart received an honorary doctor of laws degree from York University and Osgoode Hall Law School for his expansive career and ground-breaking work in consensus building and innovative dispute resolution.

Often referred to as “Bear”, Stuart was born in Montreal in 1943 and adopted into Carcross Tagish First Nation. He is internationally respected as a judge and for his work in multi-party conflict resolution, organizational change, and developing governance structures and constitutions.

Standing on the convocation stage, Stuart began his remarks by wiping away tears and admitting the experience and honour had brought great emotion. “It’s the bagpipes, they do it to me every time,” he joked.

“It is really important to me to thank everyone who is here. Nobody gets to a graduation day alone. No one can succeed alone,” he said. It was this sentiment that provided the theme for not only his illustrious career as a consensus builder but also for his remarks to convocation.

Well known as an innovator and for his passion in finding creative solutions to conflict and his determination to design and build new problem solving processes to encourage participation of all parties, Stuart brought sentencing circles and traditional First Nations justice into his court. He has a special interest in issues facing youth and Aboriginal women and has centred his career on bringing that understanding and knowledge into the Canadian court system.

His work in the Yukon with First Nations, territorial and federal governments led to alternative domestic violence protocols and special drug treatment courts. Both made justice more accessible to the communities.

“My primary purpose is to try to convince you that this is the most exciting time, ever, to be graduating from law school,” he said. “I say that because I think the whole profession is in the midst of a fundamental sea change, that will change the way we see practice from the way it has been for the last several hundred years.

“I am especially honoured to be a part of this graduating class because 45 years has made a huge difference. My graduating class was not nearly as diverse as yours. That is a fabulous change as we go forward in this world,” observed Stuart. “Not a lot changes in law. We are very slow to adopt change. You are graduating from one of the best law schools in the country for a reason.

“This law school has been the leader in this county in expanding what the law looks like,” said Stuart. “It is the only law school that I am aware of that really takes seriously the notion that being a lawyer is more than just knowing the law and that is what is really important as you go forward in your career.”

He told graduands that contrary to popular opinion, his passion was and is, to save the courts. “I think society has been dumping all of its failures from all its systems into our court system,” said Stuart. “As a result, our court is not doing what it is best suited to do and what you, I hope, will do is make sure that the court only does what it is best suited to do.”

He urged them to find other non-adversarial forums and use those forums to deal with what they are best suited for and merge this understanding and practice with an appreciation for what the court is best suited for as it is the best hope for the court and the legal profession.

“We do need a robust court to maintain democracy but the court alone cannot maintain democracy, we need to invent new processes that will engage our citizens in their civic responsibility. It’s lagging. We are not having the same effective way to engage citizens in the way our parents’ generation did. If we don’t get people engaged again to take up the responsibility every day and every way, not just through election day, we won’t be able to sustain our democracy,” said Stuart.

He asked those present to focus their practice on turning conflict into opportunities to build new relationships. He then illustrated this view with two stories from his career about the power of First Nations traditional justice and sentencing circles and its use in the court. He finished with a traditional First Nations ceremony to teach all present about the healing power of releasing anger, tension and excess energy to The Creator.

“If you have had a hand in turning the relationship between people that is in conflict around, you will feel happier and more satisfied as lawyers,” concluded Stuart.