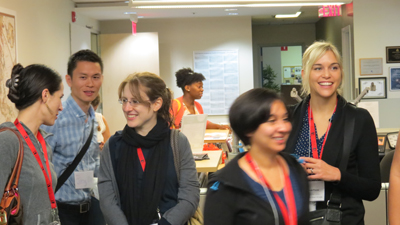 A group of high school counsellors from overseas schools in Ecuador, India, Mexico, Trinidad and Turkey visited York International on June 3. The meeting was part of a five-day visit organized by the International Recruitment Office. The counsellors met with staff members from York International and learned about the crucial services and support the University provides to international students, including student advising, transition support, health insurance and the peer program.

The delegation expressed an interest in about the multiple global learning opportunities York International facilitates for both domestic and international students in the form of exchanges, internships and summer courses abroad. Some York students were on hand to meet with the international visitors.

“As an international student coming from El Salvador, I felt very welcomed at this university when days after my arrival in Toronto I went to York International’s orientation,” said Astrid Hasfura, an international student from El Salvador studying global politics at York University. Hasfura spoke with the delegation about her experiences at York University. “Even though I came in the winter period and did not receive the traditional fall welcome I still felt that it helped me get accustomed to my new environment and made me want to be engaged with international students at York.” One of her favourite things about York is the wide variety of services and resources available for students such as different student clubs for students. For his part, Alec Shaw, a linguistics student, spoke to the counsellors about his experience on an international exchange during his final year of undergraduate studies at York University. “My experience as an exchange student at Peking University was an opportunity that shaped the course of my professional and personal

development in numerous ways,” said Shaw. “In the space of the year abroad I was confronted with various challenges and I grew to be able to address any situation.” As a linguist interested in Chinese minority languages, dialectology, as well as language and identity, studying overseas made available various communities to Shaw so that he could develop these interests. He is now beginning a master’s program in linguistics. He said the direction of his upcoming research and future work is markedly different from what he would have expected two years ago and changed because of the benefit of the exchange experience he had overseas. To learn more about York University’s international programs, visit the York International website.