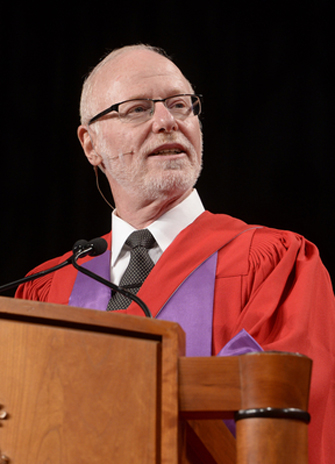 Traves, who served as president of Dalhousie University from 1995 to 2013, is a former dean of arts at York University.

On June 19, he returned to the Keele campus to receive an honorary doctor of laws degree during spring convocation ceremonies for graduates of the Faculty of Education. He was honoured by the University for his contributions to teaching and the academy.

A prolific author, Traves has written extensively on Canadian economic development and currently works as a consultant to the Nova Scotia government on regional economic development issues. He was appointed to the Order of Canada last year. Currently, he is a professor in the Faculty of Management at Dalhousie University.

Convocation offered Traves an opportunity to reflect on great teaching and its impact on students. He began his convocation address with an anecdote and recalled a CBC story about the impact that great teachers can have on their students.

“Twenty years ago, a grade nine teacher in Saskatchewan assigned his class the task of writing a letter to their future self in 2014,” began Traves. “His intention, he explained, was to encourage his students to imagine what and who they wanted to be in the future and to open their minds to what they would have to do to achieve their goals. I thought this was a very imaginative assignment.

“Now, 20 years later, the teacher mailed those letters to his former students. The CBC interviewed one of the recipients to see how he reacted and he said that he was surprised to get the letter since he had quite forgotten writing it. He did clearly recall his teacher as someone who cared about his students and always challenged them to better themselves. After he read the letter, he said that he was most struck by the picture it painted of his younger self,” said Traves.

The former student told the CBC interviewer that the letter caused him to recall his insecurity and unhappiness at a time when he was a bullied 14-year-old. Now as a successful adult and moved by the memories the old letter inspired, he decided to write another letter to his younger self. “His message: ‘Don’t worry about the small stuff in life, the petty difficulties and your insecurities, they come and go. More importantly, learn to tough it out. Good things happen to those persist with their dreams and plans’,” said Traves.

“Thinking back to his respected teacher,” said Traves, “that former student realized that some lessons unfold in unexpected ways and only come home many years after the class has finished.”

Traves urged the graduands to strive to be teachers who make a difference in their students’ lives.

“The impact you will have on some of your students could be profound,” said Traves. “You certainly will teach new skills and knowledge to your students to be sure, but just as important, you can model intellectual qualities that show them how to analyze problems or think about solutions. You can demonstrate how passion and commitment to your work earns respect and admiration. Your empathy for students’ problems and understanding of their issues could make a difference in their lives in ways that you may never know about but which could be life changing for them.”

The story and encounters with students from his own career reinforced Traves’ belief that teachers can have impacts that go far beyond their lesson plans.

“I have benefited greatly from a number of outstanding and caring teachers at every level of my formal education,” he said. “I imagine that I wasn’t always an easy student to have in their classroom. Since completing school, I have continued to learn from many sources beyond the books I’ve read and the research I’ve done by carefully observing how capable people do their job and conduct their lives. As you head off to new teaching positions, I urge you to make a serious effort to learn from more experienced colleagues and look for informal mentors who can help you to continue to grow in your profession.”