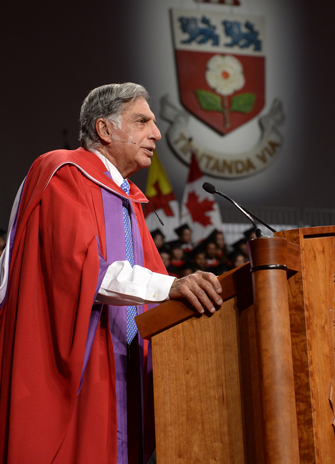 Make a difference in the world you are about to enter into, Ratan Tata told the graduating class of York University’s Schulich School of Business during Spring Convocation ceremonies Friday.

Tata received an honorary doctor of laws degree from York. “I just want to tell you how deeply indebted and deeply moved I am to receive this honour that you’ve bestowed,” said Tata, adding he hopes it “will bring our two countries closer together.”

As the chair emeritus of Tata Sons, Tata Industries, Tata Motors, Tata Steel and Tata Chemicals for some two decades, he boosted the group’s revenues from $5 to more than $100 billion. He bought Jaguar and Land Rover from Ford and positioned the group to be the biggest employer of manufacturing in the United Kingdom.

Tata is associated with many organizations and boards in India and internationally. He is the chair of the Sir Ratan Tata Trust and the Sir Dorabji Tata Trust, two of the largest private-sector promoted philanthropic trusts in India.

With the growth in revenues came an increase to those trusts and the ability to help others. This spring, Tata received the Knight Grand Cross of the Order of the British Empire. He was the first from India to be awarded the honour since the country became a republic in 1950. In 2008, he received the second-highest civilian award, the Padma Vibhushan, from the government of India.

Not one for conventional wisdom, Tata always forged his own path, trusting his own judgment and working hard to obtain his vision. He encouraged graduands to also remember those less fortunate.

“In the world we live in today, it’s a troubled world. It has conflicts, it has disputes. As you go out into the world, many of you will be leaders of countries and/or businesses. Just remember that there are millions of people who are less fortunate than you are . . . hopefully one of the achievements you will make in your life will be making a difference, not just in your success, but in the success of others,” said Tata. “The vast majority of people do not have the benefits of a great education like you do.”

Tata said he hopes “that you make a difference and that you are remembered in this world for what you are able to do for others.”