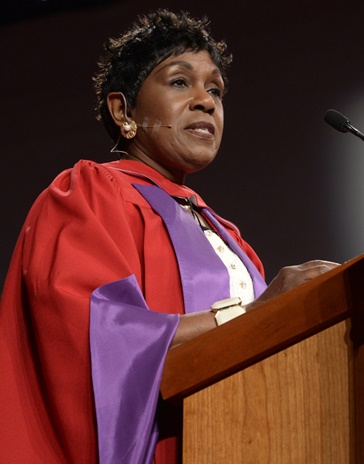 Mayann Francis has lived a life of great purpose.

In 1999, Francis and her friends sat down and wrote out their hopes and desires for the 21st century. The group placed their visions into an envelope, which was entrusted to one person for safekeeping. They agreed to keep the envelopes sealed for 10 years.

Fast forward to New Year’s Eve 2009, when Francis and her friends opened their envelopes to reveal their visions. Her vision stated: “That I will be able to motivate people to positive action through my motivational talks. That people celebrate and embrace differences. That peace and love win over hate. As the lieutenant-governor for the province of Nova Scotia, my positive actions and my determination to build Nova Scotia as a model province are realized.”

Seven years later, she was sworn in as the 31st lieutenant-governor of Nova Scotia, a position she held until 2012.

Francis shared her story with graduands of the Faculty of Liberal Arts and Professional Studies during York University’s Spring Convocation ceremonies. She was at convocation to receive an honorary doctor of laws degree for her work advancing equality and human rights.

“I share this story with you in the hope that you will recognized the power of positive thinking. Add to this hard work, faith, a plan of action and strategic thinking, and your journey and the outcome of your life can be powerful,” she said. “In my installation speech in 2006, I said I wanted people to view my appointment as a beacon of hope for all those who have felt the pains of oppression. I wanted everyone, especially young people, to understand they can achieve great heights.”

She traced her humble beginnings for graduands, and spoke about growing up in the working class neighbourhood of Whitney Pier. She attended university, married, moved to the United States, divorced, moved back to Canada and along the way earned a second degree and two certificates. Sixteen years later, she found herself living in New York City, without a job. She took a volunteer position as an X-ray technician. She was offered a paid position by a doctor to work in his clinics, which were located in some of the most dangerous areas of the city.

Francis accepted the offer, tending to drug addicts, convicts, numbers runners and scam artists. “You name them and I met them,” she told graduands. “At first I was nervous, but then I realized they were people in need.”

She invested her wages from her job at the clinic into paralegal training, eventually landing a position on Wall Street as a corporate paralegal. The job, she said, was not originally offered to her because she was black. It was only after the original candidate quit and the firm’s senior partner, who was in need of immediate help, agreed to hire her. “He did not think I would fit in. He apologized later for what he called foolish thinking. From Whitney Pier to the ghettos of New York to Wall Street, I did it!” she said.

This transition marked the beginning of her climb to success. After leaving Wall Street, she moved to a larger corporate law firm up town. Francis earned her master’s degree in public administration by taking evening and weekend courses. “I was a black woman armed with education, foundation of values, respect and faith taught to me by my family and the community of Whitney Pier, my experience working in the ghettos of New York and Wall Street, selling TV Guide, working as a telephone operator in a large department store in Brooklyn . . . all of this shaped the person before you today,” said Francis.

Her key message to graduates was simple and direct: “You have to decide on your own whether you will be a passive or active participant in the life of your community, regardless of where that community is. It is too easy to step back, watch and complain.

“You will encounter difficulties in your life’s journey just as I did,” she said. “You will encounter those who will work against you because of your skin colour, gender, religion, nationality, sexual orientation, disabilities or social status. I experienced racism, discrimination and I have been sexually harassed, but look at me know. I am a woman – a black woman – standing tall and proud.”

She advised graduating students to view life challenges not as insurmountable roadblocks, but as barriers to be overcome; lessons to be learned.

“Do not allow yourself to become a victim of someone else’s whims. Be strong, stand tall, be brave, be humble and be compassionate,” she said. “Enjoy your life, never forget to give back, be positive. When you hit that brick wall, get up, focus; take from the experience a determination to succeed and achieve your goals. And don’t waste time because time waits for no one.”