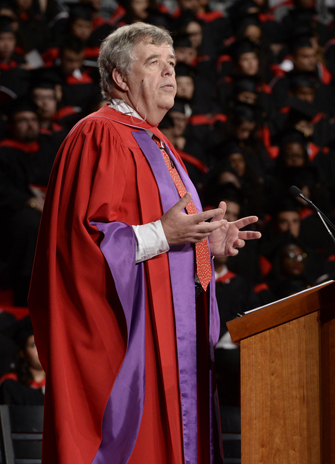 York University honorary degree recipient John Bankes (LLB/MBA ’77) challenged graduands of the Faculty of Liberal Arts and Professional Studies to embrace voluntarism as an important part of their lives and roles in making the world a better place for everyone. Bankes issued his challenge during Spring Convocation ceremonies at York University.

A long serving volunteer for York University, Bankes is an honorary governor with the York University Board of Governors and chair of PREVNET, a research organization dedicated to stopping bullying. He also serves on numerous boards of arts and community organizations as a volunteer.

He urged graduating students to commit to the vision of the great 20th century American inventor Buckminster Fuller, that “humanity’s mission as passengers on spaceship Earth is to create a world that works for everyone.” Fuller was renowned for his comprehensive perspective on the world’s problems and his dedication to using technology and innovative thinking to improving the lives of people around the world.

“I am honoured to say that he was also my friend,” said Bankes. “I think about Fuller’s mantra a lot. I think about what young people who have more tomorrows than yesterdays are to make of the world they have inherited,” he said. “And I think about the possible solutions to the world’s problems.

A key factor in solving those problems is voluntarism, said Bankes, which is a largely unappreciated renewable asset. “I do not underestimate the role that voluntarism can play in helping to solve serious societal problems and to build a foundation for lasting prosperity.”

Volunteers, he said, lighten the darkness by helping those in need. “They work to see that no elderly person goes to bed hungry, that no person spends another night shivering on the streets and that no child suffering from bullying sits alone unloved and unknown,” said Bankes. “I suggest that voluntarism’s underlying values are essential to moving society towards a more sustainable future.

“It is also about people’s need to participate in their societies and to feel that they matter to others. The social relationships intrinsic to volunteer work are critical to individual and community well being.”

Volunteering can go a long way to alleviating misery and promoting beauty through support of the arts. It can also make an enormous and meaningful difference in the lives of those who volunteer, said Bankes.

“Find a cause that needs your involvement, your integrity, loyalty, intellectual capacity, passion and most importantly your commitment to give back to society,” he said. “Commit Buckminster Fuller’s mantra to memory and to go out and create a world that works for everyone.”

Bankes is managing director and founder of Artemis Management Group Inc., a private investment bank. He works with corporate clients in North America, the UK and the Far East on a broad spectrum of mergers and acquisitions, valuation and private finance assignments and projects. He is a member of several corporate and non-profit boards, including York University, David Suzuki Foundation, Royal Life Saving Society, Fort Ticonderoga, Toronto Symphony Orchestra, and CanStage. Bankes was co-chair of the successful York University capital campaign in the late 1990s and was a lead member of the fundraising team for the Brazilian Ball, the proceeds from which were directed to the prevention of violence in the lives of children and youth. For his cultural and philanthropic contributions, Bankes has been honoured with many awards including the Queen Elizabeth II Silver Jubilee Medal and the Royal Canadian Academy of Arts Centennial Medal. He is a graduate of Queen’s, York and Harvard universities and is an adjunct professor at Osgoode Hall Law School.