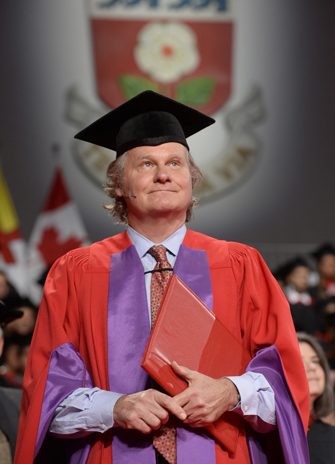 The greatest creative challenge is to be the architect of your own life, Wade Davis told the graduating class of the Faculty of Liberal Arts and Professional Studies Wednesday during Spring Convocation ceremonies.

“So be patient. Do not compromise. And give your destiny time to find you,” said Davis, who received an honorary doctor of laws degree from York University.

A professor of anthropology and the LEEF chair in cultures and ecosystems at risk at the University of British Columbia, Davis has served as the explorer-in-residence at the National Geographic Society, which named him one of the Explorers for the Millennium. He spent more than three years in the Amazon and Andes as a plant explorer, living among 15 indigenous groups in eight Latin American nations while making some 6,000 botanical collections. His book Into the Silence received the 2012 Samuel Johnson Prize.

He spoke of being asked by an old friend of his, the headman of the Ubong River Penan, the last nomadic peoples of Southeast Asia, why people who visited the moon brought back nothing but dirt. Astronauts had indeed brought back rocks and lunar dust, some 828 pounds of the stuff. But his friend’s question, said Davis, “provoked the timeless answer. The true purpose of these space journeys was not in wealth secured but in vision realized, a shift in perspective that would change our lives forever”.

On Christmas Eve in 1968 when Apollo went around the dark side of the moon to see, for the first time, an Earth rise, what “we saw was a small and fragile planet, floating as the astronauts famously remarked, ‘in the velvet void of space’. And that image sparked a paradigm shift that human beings will be speaking about for the rest of history,” said Davis. “Almost immediately we began to think in new ways.”

But this generation has its own “moon shot” and it too will be remembered for a thousand years. That is the discovery “that we are all literally brothers and sisters…. studies of the human genome have left no doubt that the genetic endowment of humanity is a continuum. Race is an utter fiction. We are all cut from the same genetic cloth, we are all descendants of a handful of people who walked out of Africa some 65,000 years ago and…carried the human spirit to every corner of the habitable world,” he said.

What that means, is that everyone has the same raw genius whether it’s applied to technology or “unraveling the complex threads of memory inherent in a myth”. Choice and cultural orientation determine how that genius is used.

“Every culture has something to teach. Every culture deserves a place at the council of human wisdom,” said Davis. “What this means for you is very simple. There are tens of thousands of teachers out there in every corner of the world that you did not even know you had.”

That opens the doors of learning. “You can sail with Polynesian Wayfinders, sailors who can sense the presence of distant atolls of islands beyond the visible horizon simply by watching the reverberation of waves across the hull of the vessel, you can go to Japan and follow the Tendai monks, who as part of their austere initiation run 17 hours at a day for seven years, wearing out five pairs of sandals every day.

“Or you can go to Africa and join a caravan of blue robed Taureg as they move through the searing sands of the Sahara, hunt narwhal with the Inuit in the light of the midnight sun….Or you can pursue completely different avenues of adventure and discovery, in science, the arts, social justice, engineering, medicine, the military or the clergy,” he said. “No generation has had so many options, or shown such promise.”

“Dream the impossible and the world will not drag you under, the amazing thing, it will lift you up. This is the message of all the cosmos, of all the mystic madman and saints. You hurl yourself into the abyss only to discover that you land on a feather bed.”

In the meantime, while the new graduates are finding their destiny, Davis advised parents to be patient and allow the process to unfurl.