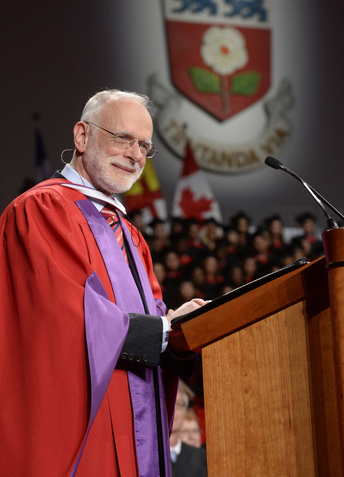 Embrace failure, for it is a driver of important change and imparts new ideas. That was the central message that CBC Radio Executive Producer Bernard (Bernie) Lucht delivered to graduands of the Faculty of Liberal Arts and Professional Studies during Tuesday’s spring convocation ceremonies.

Lucht was at York University to receive an honorary doctor of laws degree for his lifelong work advancing great ideas and mobilizing knowledge through the public broadcaster. Lucht is the executive producer of CBC’s “Writers & Company” with Eleanor Wachtel, and the annual CBC Massey Lectures series. From 1984 to 2012, he was the executive producer of the long-running CBC Radio One program “Ideas” and the Sunday afternoon program of religious and spiritual exploration “Tapestry.” Under his direction, “Ideas” received national and international recognition for the quality of its work.

Deeply humbled by the honour, Lucht thanked York University and congratulated the “soon-to-be” graduates, urging them to enjoy the rite of passage and savour their convocation.

He paid special tribute to the families and friends of granduands and the faculty and staff who provided guidance to the graduates. “How proud you must be!” he said.

The liberal arts have been under great pressure of late due to the high demand for scientists and engineers. “We need more scientists and engineers, we’re told. And we do! But we need everything else, too, in order to lead useful lives in our infinitely complex and changing world,” he said. “I want to tell you about my own path to the liberal arts, which began in science.”

Lucht told grads that as a high school student in Montreal during the late 1950s, he dreamed of becoming a nuclear physicist. “We lived in the ‘Atomic Age’ and were told that atomic energy would be the wave of the future and it would transform civilization,” he said.

Inspired by the physicist Albert Einstein and his ideas about the universe, Lucht began his studies in science at McGill University in the fall of 1962. Very quickly he was diverted by the lure of Radio McGill. “It was way more fun than science and I soon fell behind in my courses,” he said.

“I merrily carried on with my radio follies, but on the academic front, final exams loomed on the horizon and the clouds were very dark indeed. I remember writing my exams in an enormous gymnasium. It was scary because I didn’t know any of the stuff. I made up what I could and faked the rest.”

Some three weeks later when his marks arrived, Lucht was informed that his average of 37.2 per cent was not sufficient to keep him at McGill. “The number is engraved in my soul,” he said. He applied to and was accepted by Sir George Williams University (which is now part of Concordia), but on the promise that he wouldn’t study science. So he

enrolled in a variety of subjects, including history, film, politics, literature and drama, and earned his degree. “This general approach turned out to be the perfect preparation for the career that I eventually pursued,” said Lucht. “The hard skills – the journalism, production and organization – I mostly learned on the job.

“Today, the liberal arts can be a hard sell. It may not give you skills you need for a specific job, but the experts say it will prepare you for the four or five careers they say you will have in your lifetime,” said Lucht. He offered grads some sage advice, drawn from his lifetime of advancing knowledge. He challenged them to do the following: