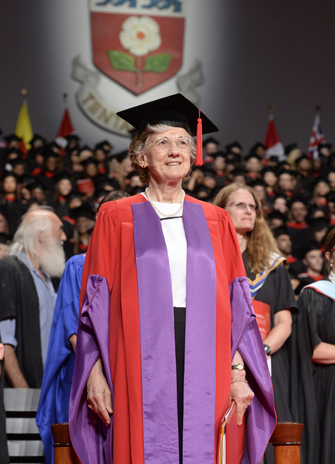 “My challenge to you graduates is to ‘change the world,’ ” said Rita Colwell during the Faculty of Health Spring Convocation ceremonies at York University Monday afternoon.

However lofty or unrealistic that may sound, she said, “each of you has a passion. Some of you want to discover new cures, perhaps win a Nobel Prize, uncover new knowledge.” But no matter what you end up doing, do not forget service to others. “There are few things more gratifying in life than helping others help themselves,” said Colwell, who received an honorary doctor of law degrees from York. As someone who has contributed to saving lives, she knows that first-hand.

“We live in a time of rapid change . . . new catastrophes seem to occur almost daily, but there are also new scientific theories and discoveries, as well as new forms of music and literature, new cures for disease, new visions,” said Colwell. It is a “golden era” of scientific discovery, with breakthroughs occurring almost daily and in virtually every field.

Canada will turn to this generation of new graduates to “find answers to the questions, solutions to the problems and fixes for the messes my generation left for you to deal with,” she said.

Colwell has studied the bacterium that causes cholera for more than 40 years. In that time, she has helped to understand where that bacterium, Vibrio cholerae, lives and what its habits are.

With her students she was able to prove that cholera is a bacterium that occurs naturally in rivers, estuaries and coastal waters, and that it has a dormant stage “that fooled researchers. It literally hides between epidemics. We found that the cholera bacterium is associated with plankton found in virtually all rivers and streams,” said Colwell. “But purifying the water is an elusive goal in poverty-stricken countries like Bangladesh and Haiti where boiling water to obtain safe drinking water is not an option. In Bangladesh, and even Haiti, there simply isn’t enough firewood to burn.”

Instead, they found that simple cloth filters provided an inexpensive way to filter out the plankton, which could reduce and curb the disease, she said. “Our team of researchers taught the women in remote villages how to filter their water. And we have learned since, years later, that they continue to filter and the cholera rate is significantly lower, by at least half.”

She called it a “small step” toward reducing the deaths, especially of children, from cholera each year. It was ordinary people with a passion who made a difference. “Distinguished educator and writer John Gardner said, ‘Democracy is measured not by its leaders doing extraordinary things, but by its citizens doing ordinary things extraordinarily well,’ ” said Colwell.

As scientist and educator, Colwell works with the Safe Water Network in New York to ensure safe drinking water for both the developed and developing world. She is the producer of the award-winning film Invisible Seas and the 2010 recipient of the Stockholm Water Prize for her contributions to solving water-related public health problems.

She told the graduating class that this is the beginning of their own lifelong journey in learning and in changing the world to become an ever better, more sustainable and more peaceful place.

“In that journey, be curious, be studious, be compassionate and be committed. You will not lack for challenges, for excitement or for gratification, and I know that each of you in your own way can change the world,” said Colwell.