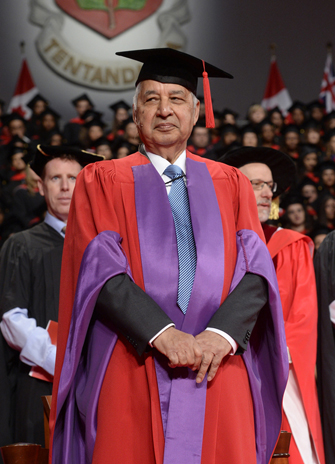 “Be the change you wish to see in the world.” With these few words, Mahatma Gandhi conveyed a profound message, said Vim Kochhar, during York’s Faculty of Health Spring Convocation ceremonies Monday, where he received an honorary doctor of laws degree.

Those are words that Kochhar, a former Canadian senator, has lived by and he encouraged York University graduands to do the same. Kochhar co-founded Rotary Cheshire Homes, where 16 deaf-blind people live barrier-free and independent lives. He went on to found the Canadian Foundation for Physically Disabled Persons, which has raised more than $25 million for people with disabilities. It has also helped establish bursaries for students with disabilities at York, what Kochhar called “Canada’s most accessible and barrier free University”.

“You can be whatever you want to be, provided you make a commitment, work hard, think hard, be flexible and never give up. We live in the best country in the world with unlimited opportunities and freedom to pursue your dreams,” said Kochhar. “My father always taught me that having a job and making a living was not an accomplishment. It is what you can do for others that matters in life.”

Kochhar’s first 18 years in India shaped who he is and what he has done. “If you are born Canadian or become Canadian – take pride in being a Canadian. Your heritage – no matter where you come from – will always help you. The country of your birth is like a mother you will always love.”

While growing up in India, he saw the Second World War, the fall of the British Empire, India’s partition, which gave birth to Pakistan, and the “assassination of Gandhi, whose philosophy had the greatest impact on my life,” said Kochhar. “He taught us non-violence is the most powerful weapon.”

Kochhar arrived in the United States to attend the University of Texas at the age of 18 with $300 in his pocket. Five years later, he graduated with his engineering degree and $10,000 in his bank account, having worked full-time while obtaining his degree. He didn’t look back. He worked as chief engineer for Intercontinental Hotels for the next seven years. In 1967, he moved to Toronto and built medical schools at the University of Toronto and Memorial University in Newfoundland. Some years later, he set up his own manufacturing and retailing Canadiana Furniture business and the Canadian Foundation for Physically Disabled Persons.

With his rich and varied experience, Kochhar had a few words of inspiration for the graduating classes. “If you dream of something – dream big. There is no challenge too great, no mission too hard, as long as you maintain your resolve, work hard and move forward. Don’t be afraid of failure. All successful people started with many failures and disappointments,” he said. “Do not ever be afraid of getting into hot water. All of us are like tea bags. We do not know our strength till we get into hot water. Don’t be afraid of changing your career if you are not happy with what you are doing.”

He also told graduands that they should not underestimate the strength York’s education has given them, the power to think and to overcome obstacles. “Just remember that you are the future of Canada and your success will determine what Canada will be in the future,” said Kochhar.