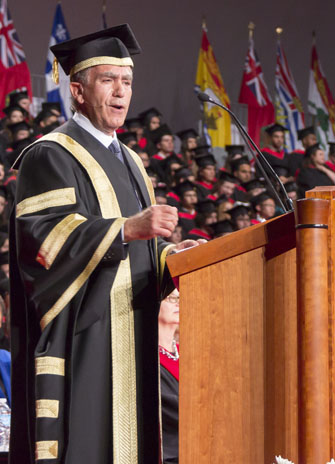 Sorbara took the oath of office for his new role as chancellor of York University from Julia Foster, chair of York’s Board of Governors. York President and Vice-Chancellor Mamdouh Shoukri, University Secretary and General Counsel Harriet Lewis and Chair of the Senate of York University Roxanne Mykitiuk assisted Sorbara as he donned the chancellor’s robe.

A delighted Sorbara spoke from the heart as he addressed graduands of the Faculty of Fine Arts, the Faculty of Graduate Studies and the Faculty of Liberal Arts and Professional Studies. “You will understand if my very first words as chancellor are words of congratulations,” he said, taking a moment to acknowledge the results of the previous day’s provincial election. “Yesterday this province had a general election and elected 107 new members to the Ontario parliament. On behalf of York University, I want to offer each one of them our very best wishes for a successful term in office and to hope to be assured by them that they remember the critical importance of postsecondary education to the overall vitality of this great province.”

Becoming chancellor of York University, said Sorbara, is an “honour beyond description.”

He described how York University had been one of his homes for some 38 years, beginning in 1976 when he started as an undergraduate student at Glendon College. “The journey from that point 38 years ago has been one that has been primarily inspired by my family who nourish and feed and give me strength in ways that no one else can. A special thank you to them,” he said. “When beginning that journey 38 years ago, I would never have imagined that it would end by becoming the titular head of this great institution.”

York has become a preeminent institution within Canada and around the world, said Sorbara.

“I want to put York’s role in a little bit of context. Fifty-five years ago, a small group of courageous students and teachers came together in September of 1960 in a grand old mansion called Faulkner Hall on the campus of the University of Toronto. They were the first classes of this institution,” he told graduands and their families. “York was seeded at that time by the University of Toronto. They were courageous because they were the very first students and faculty members of this tiny little creature of an institution. It was only a few years later when they moved to Glendon Hall, a magnificent home, which served as a like a nursery for the newborn university.”

In the mid 1960s, construction began on the Keele campus. “Now, look around today. It is vibrant and 55,000 students come here on a regular basis to get their education,” said Sorbara. He compared the founding of York University to that of the world’s first university, which began almost 900 years ago when a group of students came together in Bologna, Italy, the birthplace of the modern university system. “The University of Bologna is still doing well and attracting students,” said Sorbara. “What does that tell us? It tells us that this institution is very young and vibrant and our life expectancy is measured in centuries. We have a proud and important

mission in our society, locally, provincially, nationally and around the world, and we have only just begun.”

He thanked the students for choosing York University and congratulated them for completing their degrees. He also thanked the faculty and staff of the University for their work. “I started my political career as minister of colleges and universities, and I realized at that time that the strength of a society is how well we educate ourselves, we train ourselves, we inspire ourselves, we prepare ourselves for life in society,” said Sorbara. “Right in the centre of that experience is what faculty members do every day when they enter a classroom. To that great community of staff, the people who make the institution run, I thank you.”

And, finally, to the graduands, Sorbara said: “You have been transformed by your years here and on behalf of the university as your new chancellor, I congratulate all of you.”

An alumnus of York’s Glendon College (BA ’78) and Osgoode Hall Law School (LLB ’81), and recipient of an honorary doctor of laws (LLD ’13), Sorbara’s public service career has enhanced the lives of Ontarians. He held numerous cabinet positions in the Ontario legislature, including minister of finance, minister of colleges and universities, minister of labour & minister responsible for women’s issues, and member of the provincial parliament of Ontario representing Vaughan.

Sorbara succeeds R. Roy McMurtry as chancellor. McMurtry, a distinguished jurist, former chief justice and attorney general of the province of Ontario, and the former Canadian high commissioner to Great Britain, had served as York’s chancellor since 2008. The chancellor is the titular head of the University and confers degrees.

See the archived webcast of the June 13 ceremony (when posted) at the convocation website.