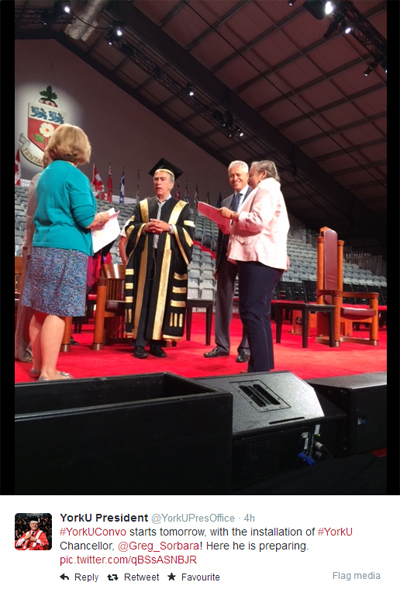 Snapped in action in this Twitter picture taken June 12 are York University’s chancellor-designate Gregory Sorbara with staff from Convocations and Ceremonials and York President and Vice-Chancellor Mamdouh Shoukri.

Gregory Sorbara, former provincial cabinet minister, will be installed as the next chancellor of York University at a ceremony on Friday, June 13 at 10:30am.

Sorbara, a lifelong public servant and politician, has been appointed as York University’s 13th Chancellor for a three-year term. As ceremonial head of the University, Sorbara will serve as lead ambassador of York, preside over all convocation ceremonies and confer degrees.

Sorbara’s installation will take place during Spring Convocation ceremonies for graduates of the Faculty of Fine Arts and the Faculty of Liberal Arts and Professional Studies at the Rexall Centre on York University’s Keele campus.

An alumnus of York’s Glendon College (BA ’78) and Osgoode Hall Law School (LLB ’81), and recipient of an honorary doctor of laws (LLD ’13), Sorbara’s experiences of both campuses provides him with a unique perspective on the value of a liberal arts degree combined with a professional degree and what it means to study at a bilingual university campus. Like many York students, he continued his educational journey as a mature student.

His public service career has enhanced the lives of Ontarians. He held numerous cabinet positions in the Ontario Legislature, including minister of finance, minister of colleges and universities, minister of labour & minister responsible for women’s issues, and member of the provincial parliament of Ontario representing Vaughan.