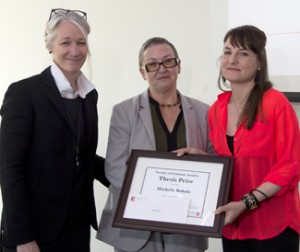 The Faculty of Graduate Studies honoured its best and brightest at a reception June 4 with prizes for last year’s outstanding master’s theses and doctoral dissertations.

Seven theses received the awards this year: work by master’s students Michelle Bobala, Jennifer Dysart and Sue Patrick Breit; and doctoral students Amanda Paxton, Jacqueline Beaudry, Rory Lucyshyn-Wright and Karine Côté-Boucher. The awards, which are given out every spring, are based on dissertations defended during the previous calendar year.

Michelle Bobala’s thesis, titled “Empowering Women and Promoting Gender Equality? The Relevance of MDG3 in the Context of Georgetown, Guyana,” was written as part of her master’s degree in the Graduate Program in Development Studies. Her research is being used to inform the work of Red Thread (a multiracial women’s organization in Georgetown), which supports the advancement of women. It has also had a significant impact on research into the eight United Nations (UN) Millennium Development Goals, which all 191 UN member states have agreed to try to achieve by 2015. Bobala’s thesis focuses on goal three: To promote gender equality and empower women.

Jennifer Dysart
Jennifer Dysart’s thesis, created as part of her master’s degree in the Graduate Program in Film, is a short documentary film titled Kewekapawetan: Return After the Flood. The film documents the aftermath of the flooding of a First Nation community in Manitoba during the 1970s by Manitoba Hydro as part of its effort to expand hydroelectric capacity. The flooding devastated what had been a vibrant and self-sufficient community, said Dysart.

Kewekapawetan means “going back” or “looking back” in the Cree language, and the film is about going on home on multiple levels. Dysart said the film examines the annual return of the people of South Indian Lake in Manitoba to their original village site. The film is also about her own journey back to her Cree heritage and a homeland where she has never lived.

Sue Patrick Breit
Sue Patrick Breit’s thesis, written as part of her master’s degree in the Graduate Program in Interdisciplinary Studies, combined prose and song. Titled “The Phenomenology of a Simple Song: Expression, Creativity, and the Recovery of Aesthetics,” the thesis is a phenomenological examination of creativity and aesthetics through the practice of song writing.

Amanda Paxton
Amanda Paxton’s doctoral dissertation, “All or Nothing: Sado-Erotics and Subjectivity in Victorian Religious Poetry,” completed in the Graduate Program in English, examined Victorian literature about the sadomasochistic relationship between the poetic speaker and God as lover, and the sociocultural reasons for the re-emergence of this kind of writing in the 19th century. A portion of one chapter of her dissertation has already been accepted for publication by the Journal of Victorian Culture. Her dissertation sheds light on the unexpected intersections between spirituality and sexuality during the Victorian period.

Jacqueline Beaudry
Jacqueline Beaudry’s doctoral dissertation, “An Examination of the Development of Rapid-onset Diabetes Induced by Elevated Exogenous Glucocortoids and a High-fat Diet in Young Sprague Dawley Rats,” was written in the Graduate Program in Kinesiology & Health Science. Beaudry developed a new research model that assessed the combined effect of stress hormones and high-fat diets and a therapeutic model to address the insulin resistance induced by stress and diet.

Rory Lucyshyn-Wright
Rory Lucyshyn-Wright’s doctoral dissertation, “Riesz-Schwartz Extensive Quantities and Vector-Valued Integration in Closed Categories,” was written in the Graduate Program in Mathematics & Statistics. His research analyzed the structures of ideas used to measure quantity in the context of physics. It constitutes a major advance in the field of category theory, an area of mathematics designed to exhibit common threads in distinct fields of mathematics, physics and computer science. Lucyshyn-Wright’s dissertation is nominated for a CAGS/Proquest-UMI Distinguished Dissertation Award in the area of Engineering, Medical and Natural Sciences. Lucyshyn-Wright now holds one of York University’s first NSERC Postdoctoral Fellowships in pure mathematics, which he is pursuing at the University of Ottawa.

Karine Côté-Boucher
Karine Côté-Boucher’s doctoral dissertation, “The Micro-Politics of Border Control: Internal Struggles at Canada Customs,” was written in the Graduate Program in Sociology. Côté-Boucher’s dissertation is another nominee for a CAGS/Proquest-UMI Distinguished Dissertation Award, but in the area of Arts, Humanities and Social Sciences. Her project examines how multiple generations of border control agents are negotiating the shift in Canada Border Services Agency from a tax collection agency to one providing security and facilitating trade. Côté-Boucher revealed how the loss of control to administrators and loss of clout in the security field has led customs officers to adopt an enforcement narrative and a policing sensibility in efforts to uphold their power and sense of significance. Côté-Boucher recently accepted a tenure-track professorship in criminology at the University of Montreal.

For more pictures from the reception, visit the Faculty of Graduate Studies Facebook page.