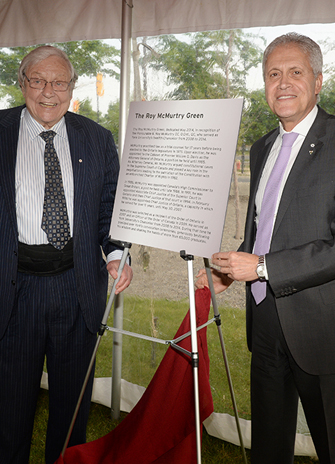 After 108 convocation addresses and 70,271 degrees conferred upon graduating students, R. Roy McMurtry (LLB ’58) is stepping down as York’s 12th chancellor. Last month, the University thanked him for his years of service with a special tribute recognizing his outstanding contributions to York.

On May 29, a group of more than 80 guests, including current and former board members, distinguished alumni, president and chancellor emeriti and the University’s top administrators, gathered in front of Osgoode Hall’s Ignat Kaneff Building as President and Vice-Chancellor Mamdouh Shoukri and Vice-President Advancement Jeff O’Hagan announced the dedication of the Roy McMurtry Green in honour of the departing chancellor.

“Over the past six years, York University has become a part of my DNA, so I am very grateful to receive this honour,” said McMurtry. “It was a privilege to be a part of York’s journey and to bear witness to its unique diversity and strong determination to connect with the broader community. Serving as university chancellor was an unforgettable experience that I will always treasure. We should all be proud of what York has accomplished and will continue to accomplish.”

Throughout a career spanning more than half a century, McMurtry has stood out as a remarkable man whose work in law, politics and beyond has forever changed the fabric of Canada. After graduating from York, McMurtry served as litigation lawyer, attorney general of Ontario, high commissioner to the United Kingdom, commissioner of the Canadian Football League and chief justice of Ontario. He had a key role in the patriation of Canada’s Constitution, in ending apartheid in South Africa and in legalizing same-sex marriage in Ontario. McMurtry was appointed chancellor to York in May 2008.

The dedication was followed by a private dinner in the Ignat Kaneff Building’s Paul B. Helliwell Centre, where guests were treated to remarks and memories from some of McMurtry’s long-time colleagues, including former Chair of the Board of Governors of York University Paul Cantor, as well as current Chair, Julia Foster.

“The Roy McMurtry Green solidifies the chancellor’s legacy as a lifelong advocate for social justice and community engagement—a spirit that he brought with him to York,” said Shoukri. “His reputation as a champion of York University will endure as an inspiration for generations of students.”