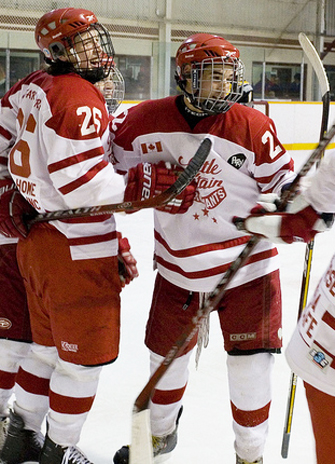 When boys first start bodychecking in hockey, they find the freedom to hit other players without repercussions fun and exciting, a York University study has found.

As one study participant said, “I like to hit and not get into trouble. If I just feel like hitting someone then you can just go out and hit, and you can’t really do that anywhere else.” Some of the other boys said they felt a “rush of excitement” when bodychecking, and “I kind of like hitting. It’s kind of fun.”

The study of 11- and 12-year-old boys in peewee hockey looks at the transition of going from non-contact to bodychecking in hockey, through a psychological and social lens. It comes during a time of intense debate about the appropriate age to allow bodychecking in ice hockey. Starting this fall, none of the peewee teams will be allowed to bodycheck; that will only be allowed starting at the Bantam level – age 13.

“Bodychecking is a clearly defined skill within the context of the game, but many participants talked instead about ‘hitting’ – with intent to harm. Some kids talked about using bodychecking to intimidate, gain power and take out their frustrations, while others spoke about their fears and anxieties of being hurt. We found these findings very interesting, because when you think about it, in any other context, we would call this bullying,” says Professor Jessica Fraser-Thomas of York University’s School of Kinesiology and Health Science in the Faculty of Health.

The study, “I like that you can hit a guy and not really get in trouble”: Young Ice Hockey Players’ Experiences with Body Checking,” was published in the International Journal of Sport and Exercise Psychology. It looked at boys from nine competitive teams in three southern Ontario leagues.

It also revealed a disconnect. Although the young hockey players found it exhilarating to whack their opponents, when a player was seriously injured as a result, many felt true remorse. It’s as if the hitting and causing injury isn’t connecting in their brains.

“When asked about the introduction of bodychecking, the first thing they talked about was the increase in injuries. They were scared, shocked and upset by these injuries. It was fascinating how they expressed such empathy for injured players – crying seeing a kid taken off on a stretcher – then turned around immediately to talk about how much they enjoy hitting people,” says Fraser-Thomas.

“Like every game there’s at least one or two [injuries]. . . . If there’s a guy going for the puck, they’re going to hurt the kid usually,” said one participant.

But it’s more than just the young players not connecting the dots; their coaches and parents aren’t either, says Fraser-Thomas. “The control and intimidation, much of that message is coming from the parents.” They are advocating and coaching the kids to “hit” the other players. They are advised to use their body size, if they are physically bigger, to their advantage. And at that age, there is a significant difference of body sizes.

“There is a certain language that goes with sport – and specifically hockey: ‘You’ve got to take control of the game, you’ve got to use your body – use it to your advantage’ – that language is very common,” she says.

And the kids are responding. They report enjoying the feeling of power that comes with intimidating their opponents and taking control of the situation. They are also finding slamming some guy into the boards a release for their anger and frustration and that raises red flags for Fraser-Thomas.

“There is a large body of research on body checking from a physical aspect – and concerns about injuries – but we have really not even scratched the surface from a psychosocial perspective, which I think is really relevant in this culture where there is concern about aggression and bullying,” she says.

Fraser-Thomas thinks more training for coaches and parents so they can better guide young hockey players could be part of the answer. Positive youth development through sports can only happen in the right context.

Alongside the 2013 rule change regarding the increased age for bodychecking introduction, there was also a recommendation that a working group would be formed to develop an instructional resource program to support progressive implementation of checking skills.

“I don’t think bodychecking per se is problematic. But the messages that kids are getting around bodychecking may be problematic – to ‘hit’, to take control, to use their body to their advantage – these can come off as messages of aggression and intimidation,” she says.

Bodychecking needs to be taught within the context of positive development, moral education and appropriate social norms, says Fraser-Thomas. This did happen, but maybe not enough. “A few of the study participants talked about this. They outlined how they would be watching an NHL game and observe a ‘dirty’ hit, and their Dad would turn it into a teachable moment about respecting your opponent,” she says.

“Coaches and parents have an obligation to help shape kids’ understanding of what body checking is and should be used for – to separate the player from the puck. It shouldn’t be okay to use bodychecking as an outlet for anger and frustrations. Parents and coaches also need to help young children make the connection between a ‘dirty’ check and potential harm to another player.”