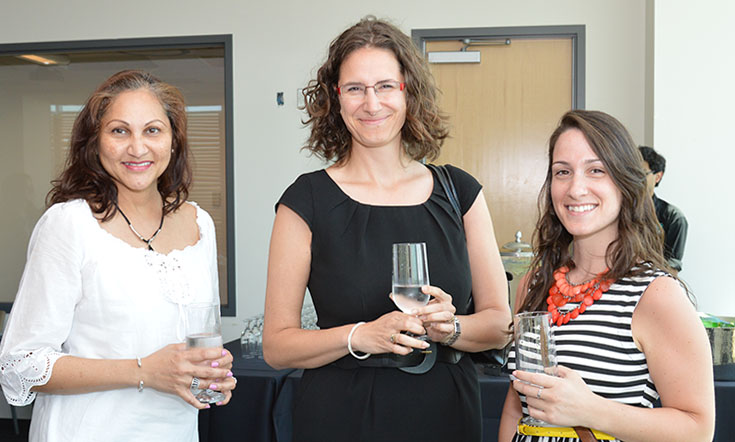 Each year, York University is one of the United Way’s top contributors. This success is thanks in large part to the University’s staff, faculty and students who, through their participation and financial support, work to address the community’s growing social concerns as part of the annual York Cares campaign. This year was no exception.

At a May 26 celebration, it was announced by York President and Vice-Chancellor Mamdouh Shoukri and Vice-President Advancement Jeff O’Hagan that the University’s 2013 York Cares campaign raised approximately $180,000 in support of the United Way.

The event also recognized staff from the president’s division with the Participation Challenge trophy, which is awarded annually to the department that achieves the highest level of participation during the campaign. This year, 41 per cent of staff in the president’s division made a donation to the campaign, resulting in a 33 per cent increase to their achievements from last year. Forty staff members were on hand at the event to be recognized for these contributions.

“I would like to extend my thanks to all of those at York who embraced the York Cares campaign and helped to make it an overwhelming success,” said Shoukri. “In particular, I want to recognize the efforts of the staff in my division, whose impressive participation in this campaign helped put our University’s commitment to philanthropy and social responsibility into action for those in need. ”

At the helm of the 2013 York Cares campaign for the president’s division were ambassadors Kashfia Mahmud, finance and projects assistant in the Office of the President, and Grace Randell, senior adviser, strategic initiatives and administration in Communications and Public Affairs. To encourage their colleagues to participate and contribute throughout the campaign, Mahmud and Randell focused on education and awareness, including presentations about United Way in staff meetings and events where colleagues had the opportunity to participate.

And in keeping with their annual York Cares tradition, Office of the President staffers Angus Anderson, coordinator, special events, and Irene Fezza, executive assistant to the president, invited colleagues from across campus to a Thanksgiving-themed event, where they served lunch and demonstrated techniques to create a festive Thanksgiving table. The event was well attended and helped to successfully raise both awareness and contributions for the United Way among guests.

“We are incredibly grateful for your strong support to the York Cares campaign and the impact that it generates for the United Way and for those in need in our community,” said O’Hagan, who served as leadership co-chair of the campaign along with Rhonda Lenton, vice-president academic and provost. “Members of this team from the president’s division were visible supporters of the campaign and consistently demonstrated their passion for the cause. The participation we saw this year from staff across campus has been inspiring to say the least and we know this means great things to come for the York Cares campaign.”

Overall, the average participation rate across York was eight per cent while more than half of all donations came in at the level of more than $1,000.