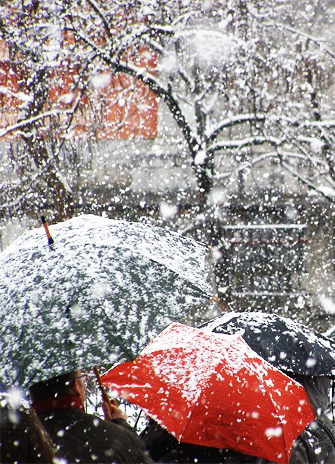 By three months of age, infants are visually able to locate objects that stand out from a group, such as a red umbrella in a sea of grey ones, a York University study has found.

Although this form of visual attention is present in adults, it was unknown how early it developed in infants. In the study, led by York University psychology Professor Scott Adler, the latency of eye movements in both infants and adults were measured in hundreds of milliseconds when presented with certain visual search tasks.

It was found that infants, like adults, were able to pick out a single R character among increasingly larger groups of P characters. The R is considered to have a distinguishing, unique feature that stands out.

“This indicates that infants at a very young age are able to selectively extract information from the environment in a similar manner as adults,” says Adler.

That means they are just as adept at locating specific stimuli among competing and distracting stimuli in their environment. In addition, the infants showed a similar an asymmetrical pattern of detection to locate the unique target as the adults. The study also looked at what happened when infants and adults were given a “feature-absent” target among distracting “feature-present” objects, such as a P among varying sized groups of Rs. In this case, the infants were less efficient at finding the differing letter without a distinguishing feature.

“This is what’s called ‘bottom-up’ attention,” says Adler. “That’s because it’s coming from the environment and going up into the processing system. Top-down attention is where your goals, ideas and thoughts control where you attend. You have voluntary control over what information you’re going to choose to process.”

Bottom-up attention, is thought to be a more primitive, but important process that would, for example, allow a predator, such as a lion, to be noticed among a group of zebras. It is also when people notice something different or salient in their environment, such as a door suddenly opening and someone walking through it into a classroom.

With top-down attention, the ability to ignore certain stimuli in the search for something specific, such as lost keys, is greatly enhanced.

Adler has also found, in as yet unpublished research, that top-down attention has not developed in infants even by six months of age. This could have potential implications for developmental disabilities if it doesn’t develop fully. That’s because the attentional deficit exhibited in developmental disabilities might be related to the top-down, goal-oriented and controlling way of allocating attention, says Adler.

“Visual attention is regarded by many as the gateway to information processing in the brain. It is one of the areas that is thought to be limiting in infancy, and one of the things that has to develop,” says Adler. “A lot of things, such as intellectual development, academic performance and developmental disabilities, all relate back in some way to attention. Even autism and Attention Deficit Disorder have an attention component. So it plays a large factor.”

Most studies to date have not compared infants and adults using the same tasks and measurements. For this study, the infants are on their backs with the stimuli above them on a screen, while infrared light tracks their eye movements.

“The aim of the present study was to add to our understanding of infants’ ability to selectively attend to particular items in the presence of competing stimuli by examining the development of selective attention mechanisms involved in visual search, particularly the role of bottom-up processing of stimulus salience,” says Adler.

The study, “Search Asymmetry and Eye Movements in Infants and Adults”, was published online in the journal of Attention, Perception, and Psychophysics.