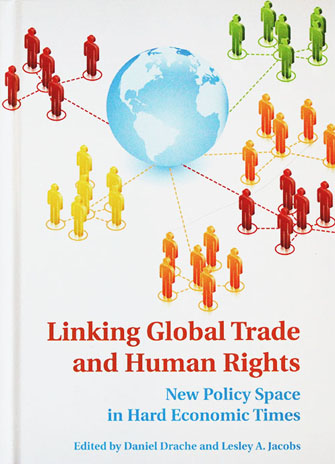 What happens to public policy in the aftermath of an event such as the economic meltdown of 2008? Is there space for innovation between existing public policy and the devastation that comes with a major crisis? How does an economic catastrophe inspire new public policy? Does stimulus spending work?  Did innovations such as “Cash for Clunkers” and “Obamacare” succeed?

“The book originally grew out of a 2011 conference at York University that was organized around the theme of new policy spaces and human rights in a dismal economic era. The idea for the conference was to look at the how new policies are emerging following the 2008 economic crisis despite market fundamentalism,” says Drache.

The success of the conference led Drache and Jacobs to compile 16 essays on the theme for a book, which was published last month by Cambridge University Press. Authored by an international cohort of leading scholars in the areas of law, public policy, political science, human rights and economics, the book offers divergent views of what is possible in policy space innovation and what has, and hasn’t, worked.

“The book’s origins are rooted in a Major Collaborative Research Initiative funded by the Social Sciences and Humanities Research Council of Canada that focused on the Asia-Pacific Dispute Resolution Project and the intersections between international trade and human rights law,” says Jacobs. “Daniel and I identified leading innovative thinkers working in this field and invited them to a workshop and to contribute to the volume.”

Contributors are united under a central theme that major reconstruction of social and economic policy spaces for governments around the world can indeed take place during tough times such as the 2008 global financial crisis. Innovative new policies, such as the popular Cash for Clunkers Program and Obamacare in the United States, $2 trillion dollars in quantitative easing, Brazil’s Bolsa Família initiative and India’s National Rural Employment Guarantee, are all examples of innovation in action, says Drache. He points out that during the 2008 global economic crisis, countries around the world used national policy spaces to respond to the crisis in ways that shed new light on the possibilities for linkages between international trade and human rights.

“This book runs against what some see as market fundamentalism as only squeezing the public sphere,” says Drache. “There were a lot of consequences to map and absorb.”

“Traditionally, trade agreements and international economic law are widely viewed by both their supporters and critics as reducing policy space for governments to act. When we looked at the period after 2008, however, we observed a very different phenomena, namely, in some cases policy space did shrink but in many countries, especially those that adopted stimulus packages, we witnessed important expanding policy space yielding innovative policies,” says Jacobs, noting that United States made remarkable strides towards universal health care, India adopted a massive rural employment scheme, Brazil continued to innovate in its poverty reduction strategies.

“From our perspective, all of these examples and many others suggested to us that policy space offers great opportunities for linking global trade and human rights after major economic crises,” adds Jacobs.

The book introduces the idea of policy space as an innovative way to reframe recent developments in global governance. Policy space can be defined as the arena where governments have the capacity to implement public policies of their own choosing, says Drache. Policy space is a fluid idea with clear successes and obvious failures that the book explores. The multidisciplinary contributions provide explanations for why the global landscape for national policy space has changed, illustrate clearly instances of this change and project the future paths for policy development in social and economic policy spaces, especially with reference to linkages between international trade and human rights in countries from the Global North as well as Brazil, China, and India.

“Necessity is the mother of invention,” says Drache. “Fundamental changes come about because governments learn by doing and there is a changing relationship between governments and their citizens, who are becoming more influential due to social media. The most interesting aspect of its book is the great diversity of its content and its critique of the post-crisis global order.”

“The book is genuinely ‘interdisciplinary’ and will appeal to those working in political economy, international law, human rights and globalization, as well as public policy,” agrees Jacobs. “We believe that the innovative concept of policy space in this book has a great future for developing new perspectives on traditional areas of political science, law, economics, and international relations.”

Drache and Jacobs are already working on a follow-up book that further develops the themes of this book.

The hard cover edition is available online through Cambridge University Press, Amazon and other retailers. It is also available for download as an eBook through Amazon.ca, iTunes and Kobo Books.

By Jenny Pitt-Clark, YFile editor, with notes from the book’s editors.