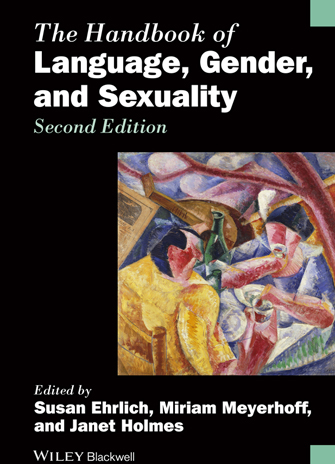 The dynamic ways in which women and men construct gendered and sexual identities through language is given a fresh look in the significantly expanded and updated second edition of The Handbook of Language, Gender and Sexuality, co-edited by York Professor Susan Ehrlich.

The Handbook of Language, Gender and Sexuality (Wiley Blackwell) brings together a team of leading specialists in the field to create a comprehensive overview of key historical themes and issues, along with methodologies and cutting-edge research topics.

Edited by Ehrlich of York’s Department of Languages, Literatures & Linguistics in the Faculty of Liberal Arts & Professional Studies, along with Professor Miriam Meyerhoff and Professor Emeritus Janet Holmes, both in linguistics at the Victoria University of Wellington, New Zealand, the book presents data and case studies from interactions in a range of social contexts and different communities.

Ehrlich is also the author of Representing Rape: Language and Sexual Consent (2001), editor of Language and Gender: Modern Themes in English Studies (2007) and co-editor of “Why Do You Ask?”: The Function of Questions in Institutional Discourse (2010).

“The 10 years between the appearance of the first edition of The Handbook of Language and Gender and this second edition have seen significant shifts in the study of gender and language, including increased attention to the relationship between gender and sexuality,” says Ehrlich.

The most obvious difference between this edition and the first is the addition of “sexuality” to the title.“This was an attempt to highlight the ongoing importance of sexuality to the field and the close connections between gender and sexuality,” says Ehrlich. “A concern with questions of sexuality is only one of the changes the field has witnessed in the last decade. It has also been enriched by research on globalization and masculinities, topics that both receive greater prominence in the new edition.”

The second edition of The Handbook of Language, Gender and Sexuality includes a new introduction, 24 newly commissioned chapters, 10 updated chapters and a comprehensive index. These new chapters include research in non-English speaking countries, from Asia to South America, and tackle topics such as language, gender and popular culture; language and sexual identities; and language, gender and socio-phonetics. In-depth overviews explore the study of language and gender worldwide, and the collection features data and case studies from interactions across a range of social contexts and communities.

A new section provides an overview of methodological approaches to language and gender, including chapters on conversation analysis, critical discourse analysis, ethnographic methods and variation theory.

The volume is a comprehensive resource that provides a state-of-the-art overview of language and gender for established scholars and an essential introduction to the field for advanced undergraduate and graduate students in a wide range of disciplines, from linguistics to psychology and sociology.