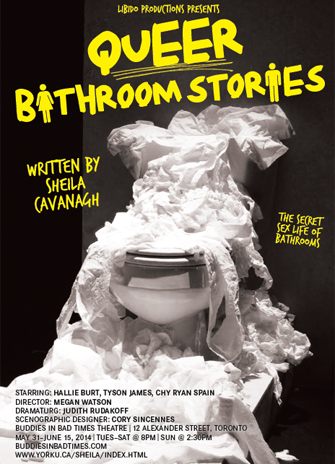 A new play by a York professor will explore the secret sex life of bathrooms and gender politics in public washrooms, while exhibiting a refined sense of toilet humour.

Queer Bathroom Stories the play is based on the award-winning book Queering Bathrooms: Gender, Sexuality and the Hygienic Imagination (2010), both written by York sociology Professor Sheila Cavanagh, coordinator of York’s Sexuality Studies Program. It is a play about lesbian, gay, bisexual, trans and queer experiences in Canada’s public facilities.

It will have its world premiere at Buddies in Bad Times Theatre, from May 31 to June 15, 12 Alexander St., Toronto. Following the previews (May 31 and June 1), the official opening will take place June 3 and the after-party (open to all) will be in the Cabaret at Buddies. Queer Bathroom Stories will be performed Tuesday to Saturday at 8pm and Sunday at 2:30pm. Tickets range from $20 to $25, with special rates for student groups.

The play is an official World Pride in Toronto event, which is significant, says Cavanagh, as it “is based on interviews with LGBTQ people in Toronto, which were published in my Queering Bathrooms book.” In Queer Bathroom Stories, three actors play 72 characters who are composites culled from a hundred of those interviews with LGBTQ North Americans.

The play is much more than the secret sex life of the bathroom as told through the eyes of those interviewed, it is a brutally honest display of gender politics in public washrooms. Cavanagh asserts that while toilets are not typically considered within traditional scholarly bounds, they form a crucial part of people’s modern understanding of sex and gender.

“Bathrooms have always been places where we segregate people on the basis of gender, sexuality, class, disability and race,”saysCavanagh. “In addition, the production is an example of a new method called queer performance ethnography and is designed to increase awareness about transphobia and homophobia.You will never look at the bathroom the same way after witnessing the tragic and passionate reenactments of life in the can.”

Queer Bathroom Stories first jumped from the page to the stage at the original book launch at the Gladstone Hotel in 2010. Queer Bathroom Monologues was then staged at the 2011 Toronto Fringe Festival, where it was presented with the Patron’s Pick Award.

The play was funded by a Social Sciences & Humanities Research Council of Canada dissemination grant.