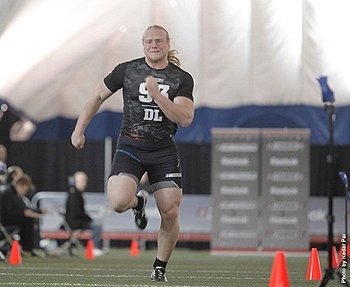 York University Lions football player James Tuck was selected in the fourth round (31st overall) by the Montreal Alouettes in the 2014 Canadian Football League (CFL) Draft on Tuesday night.

Tuck, who is a student in the Business and Society Program in the Faculty of Liberal Arts and Professional Studies, has played with the Lions for the past four seasons. He has become a major contributor on the defensive line after switching from linebacker in his third year. He has earned the team’s Nobby Wirkowski Defensive MVP Trophy in each of the last two years.

In 2013, the pass-rushing specialist finished 11th in the Ontario University Athletics (OUA) league in tackles, with 41.5 including eight tackles for a loss of 71 yards, and tied for 13th in sacks (4.5). One year earlier, he ranked seventh in the OUA with 6.5 sacks and also had 33 total tackles and one forced fumble.

Tuck moved up the draft charts earlier this spring after a tremendous performance at the Toronto regional combine, which earned him an invitation to the CFL’s National Combine in April. He recorded the best numbers among defensive linemen in four drills at the regional combine and had another strong showing on the national stage.

Tuck, a 5-foot-11, 230-pound defensive end from Aurora, Ont., is the first Lion to be taken in the annual CFL draft since Ricky Foley was selected in the first round (fourth overall) by the BC Lions in 2005. He will get his first taste of professional football at the end of the month when he reports to Montreal for the opening of training camp.