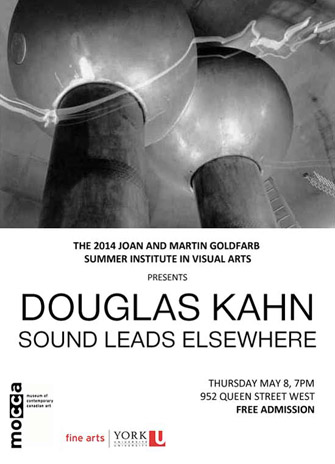 Sound has definitely arrived in the arts, particularly in sound art and sound studies, but is it a destination? That’s the key question that will be explored during Sonic Practices in X Actions at the 2014 Joan & Martin Goldfarb Summer Institute in Visual Arts at York University.

On May 8 at the Museum of Contemporary Canadian Art (located at 952 Queen Street West in Toronto), Douglas Kahn, professor of media and innovation at the National Institute of Experimental Arts in the College of Fine Arts at the University of New South Wales in Sydney, Australia, will give a featured presentation for Sonic Practices in X Actions. Kahn is an Australian Research Council Fellow and an historical theorist of media, science and the arts from the late 19th century to the present. He has a special interest in the traditions of the avant-garde and experimentalism. Kahn’s talk, “Sound leads elsewhere”, will take place from 7 to 9pm at the museum.

Kahn is the author of Noise Water Meat: A History of Sound in the Arts (1999) and Earth Sound Earth Signal: Energies and Earth Magnitude in the Arts (2013). He is co-editor with Larry Austin of Source: Music of the Avant-garde (2011) and with Hannah Higgins of Mainframe Experimentalism: Early Computing and the Foundations of the Digital Arts (2012).

Sonic Practices in X Actions takes as its primary interest sound and sound art, especially as it has unfolded in and around the visual arts, its discourses and institutions during the 20th and 21st centuries. Themes that will be explored in this intensive three-week graduate course running May 5 to 23 include: the challenges sound and sound art pose to “the visual arts” and visual culture more broadly as well as the opportunities emerging out of these; the materialities of sound and the role the latter might play within emergent speculative thought; and modes of intuiting novel political orientations through sonic practices. In addition, the summer institute will consider sound as one means of navigating transdisciplinary vectors that cut across the domains of art, science and technology. Taking its cue from a range of mid-20th propositions associated with the artistic avant-garde, the course is structured through a series of “actions”  both on and off campus that allow students to consider these themes at the seminar table, in the studio, on the street, and in the gallery.

A potent means for accessing and understanding the world, sound works best when it leads away from itself. John Cage opened music up to sound; it is important to keep going and open sound to energies. Sound is but one physical energy among others and, as such, relates to vernacular appeals long made by artists and musicians, to the signals coursing through media for over a century and a half, and to the pervasive energy systems of the earth.

The summer institute is named in recognition of Joan and Martin Goldfarb, long-standing supporters of York’s Faculty of Fine Arts, whose generous gift has made this annual program possible.