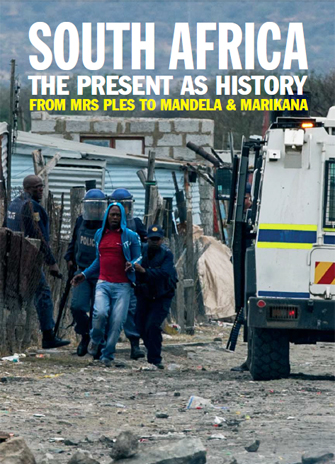 What went wrong? Did the liberation of South Africa fail and what happens next? In two new books, York Professor Emeritus John S. Saul looks at what led up to the abolishment of apartheid, the election of Nelson Mandela and the African National Congress (ANC) in 1994, and what has followed since.

Both books, South Africa – The Present as History: From Mrs Ples to Mandela and Marikana (James Currey Publishing) co-authored by Saul and Patrick Bond and A Flawed Freedom: Rethinking Southern African Liberation (Between the Lines) by Saul, will launch at 12:15pm, Sunday, May 11 at York University. The launch will take place during the Confronting Crisis: Left Praxis in the Face of Austerity, War and Revolution Historical Materialism conference, which will run from May 8 to 11 at York’s Keele campus.

South Africa – The Present as History presents a history of the country from its earliest times, a long European conquest and two decades of democracy to today’s post-apartheid society. Every election since 1994 has confirmed the ANC’s hold on power, popular and legitimate. Yet, South Africa has one of the highest rates of protest and dissent in the world – underscored by the police shooting of 34 striking miners at Marikana in 2012 – regions of deep poverty and environmental degradation, rising inequality and high unemployment rates.

South Africa – The Present as History looks at this paradox by examining the precise character of the post-apartheid state and the roots of the hope that something better than the semi-liberation that the ANC has presided over must not be long delayed. This hope resides within the ANC and the country’s broader society.

Saul and Bond, a professor of development studies and director of the Centre for Civil Society at the University of KwaZulu-Natal in South Africa, look at the increasing signs of social unrest and class conflict, reflecting on the present situation in South Africa and the possibility of a “next liberation struggle”.

In A Flawed Freedom, Saul examines the liberation struggle in South Africa, placing it in a regional and global context. He looks at how initial optimism and hope has given way to a sense of crisis following soaring inequality levels and the massacre of workers at Marikana.

In addition, Saul rethinks socialism and Julius Nyerere’s ujamaa or unity in Tanzania and explores the present day Mozambique. He examines the reality of southern Africa’s post-liberation plight, drawing on the insights of Frantz Fanon and Amilcar Cabral and assessing claims that a new “precariat” has emerged.

Saul looks at the possibility of a new and more hopeful future spurred on by the “rebellion of the poor” and the recent Marikana massacre.

For more information about the conference, visit the Historical Materialism website.