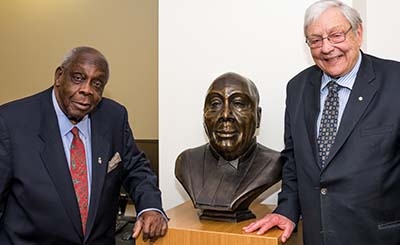 Above: From left, George Carter with York Chancellor Roy McMurtry

Family and friends of Justice George E. Carter, a graduate of Osgoode Hall Law School’s Class of 1948 who became this country’s first Canadian-born black judge, watched with pride April 27 as a bronze bust was unveiled in the Osgoode Hall Law Library commemorating his leadership and contributions to Canadian society.

Sossin said distinguished alumni such as Carter and the late Lincoln Alexander (LLB ’53) “have made amazing things possible.” The bust “will be a lasting legacy to George Carter and all those he has inspired.”

McMurtry told the invited guests that as chancellor he was pleased and privileged to be at this “very important and historic event.”

“Even if I wasn’t chancellor, I’d be here,” McMurtry said. “I’ve only known George for about 60 years.”

As Attorney General, McMurtry appointed Carter as an Ontario provincial court judge in 1979. Carter was later appointed to the Ontario Court of Justice, where he served for 16 years. Prior to his appointment to the Bench, Carter had his own firm and practised in the areas of real estate, criminal and family law for 31 years.

Linda Carter, who documented her father’s life in her 2010 film, The Making of a Judge, said the idea of the bust came about “by happenstance.” She was sitting in a doctor’s office waiting for her appointment when she struck up a conversation with another woman who turned out to be world-renowned sculptor Maryon Kanteroff. Their discussion encouraged Carter a few years later to seek out sculptor Gerard Godin to create a bust of her father.

“It’s been such an experience getting this done. I’m just very proud,” said Linda Carter, who acknowledged McMurtry’s help in bringing the commemorative sculpture to fruition.

George Carter, 92, echoed his daughter’s sentiments. “We owe so much to the chancellor … a decent, wonderful human being.”

Looking at the bust and at the audience, a smiling Carter said, “It’s really something, you know.”