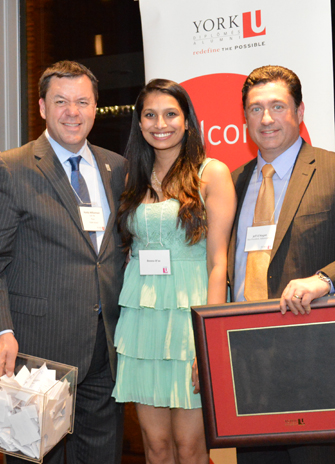 They are not your average students. And it was not an average party that celebrated their outstanding achievements at the Arcadian Loft in downtown Toronto last week.

More than 300 soon-to-be York grads and alumni leaders attended this year’s GRADitude, an annual event the University hosts to honour its top athletes, scholars and contributors to student and campus life.

With DJ Michael Coombs on hand, people hit the dance floor, lined up at the photo booth for group selfies and took to social media to express their own gratitude.

“Thank you York for an incredible night,”@TaliishaR tweeted.

Randy Williamson (LLB ’88), chair of the York University Alumni Association, which sponsored the event, said that students invited to this year’s GRADitude are York’s best and brightest. “I want to take this opportunity to congratulate those in the Class of 2014 and be the first to welcome them to York’s distinguished alumni community,” he said. “I look forward to celebrating and sharing the great things they’ll accomplish as they move into this next phase of their lives.”

With almost 270,000 grads located in more than 150 countries around the world, York has a massive alumni network, said Jeff O’Hagan, vice-president advancement of York University. “It’s important for us to celebrate each and every one of our student leaders for the work they do,” he said. “Our students and alumni play a vital role in the University and far beyond. By introducing our top grads to our leading alumni supporters at GRADitude, we hope to inspire them to stay in touch and engage the University as active alumni.”

Here are four student leaders who have made the University a better place during their time at York:

When he was in Grade 10, the only thing Luke Durward cared about was having a six pack. Since then, the kinesiology student has become “exponentially more interested” in nutrition and fitness. His recent TEDxYorkU talk on eating healthy has garnered more than 20,000 views on YouTube and is one of the most popular performances in the history of TEDxYorkU.

“In high school, the only thing I knew was I liked playing sports and lifting weights. I’ve since learned to be much more level-headed about it,” says the self-professed fitness nut who’s now a certified personal trainer.

Durward is also a winner of York’s “this is my time” current student contest. His vision to reverse the growing number of obesity and type 2 diabetes cases in the world is something he is deeply passionate about.

Last year, following an icy slip and fall that broke his leg, Durward, a varsity pole vaulter, mentored and coached his younger brother, Lloyd, to overcome self-esteem issues due to being overweight. Today, Durward operates his own online weight-loss coaching business.

From managing and videoing her high school boys basketball team, to being a student senator, president of the Middle Eastern Students Association and member of the Student Council of Liberal Arts & Professional Studies at York, Mariam Hamaoui has gained tremendous life experiences through her extracurricular commitments.

“I learned a lot about things you don’t learn in classrooms,” the religious studies student said. With AIESEC, a global youth network that empowers young people with practical leadership opportunities, Hamaoui travelled to Tunisia for a two-month internship at a local hospital last year. Through her involvement with AIESEC, she has also helped other York students pursue work or internship opportunities abroad.

“I like helping people,” said Hamaoui, who co-founded RefugeAid two years ago to help provide humanitarian aid and raise awareness about issues affecting refugees and asylum seekers. “I knew I wanted to get involved with different things when I came to York,” she added. “I hope I have impacted others to be more active both in and outside of school.”

Chris Puckett came to York to play for the varsity soccer team. That experience in his first year not only provided an opportunity for the honours student to meet new people and make new connections, it nurtured a sense of York pride in him early on.

“It was a very special and rewarding experience,” said Puckett, who studied law and society as well as political science at York. As someone who has been heavily involved with the York community on many fronts, Puckett said he is most proud of having been a part of the Vanier College Council as president, vice-president finance and vice-president social/cultural.

“For four years, I spent every day with the most passionate team I could ever ask for,” he said. “We made it our responsibility to ensure students were given every possible opportunity to get involved.”

While Puckett values classroom learning, he said the “life education” York offers has been invaluable. “There are undoubtedly things you will learn outside the classroom that no book or professor can teach you,” he said. “For me, being involved as a student leader has helped me be a better student.”

For Sarah Yu, being active is about being connected 24-7.

A blogger, vlogger and social-media butterfly, the self-styled “YouTube geek” is a Glendon eAmbassador who helps to engage incoming students.

“York is a big university and Internet has changed so much in terms of connecting new students to Glendon,” said Yu, a third-year English and linguistics student. A recipient of the Glendon Leadership Award for Outstanding Contributions to Student Life, Yu has served as community manager on social media for TEDxYorkU, marketing director for the YU Charity Ball and frosh boss for Glendon Frosh Week.

Initially motivated by social media as a way to keep in touch with high-school friends, she said she has since developed a strong interest in strategic web communications as well as the changing ways people consume media.

“My parents used to tell me to read newspapers, but I’d rather go to Google News where I can read the same story from different media outlets,” Yu said. “I’m interested in finance, technology and many other things. There’s so much going on. I don’t want to be stagnant ever. I want to be learning constantly.”