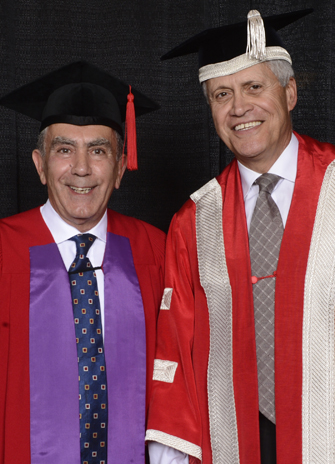 Above: Gregory Sorbara (left) with York President and Vice-Chancellor Mamdouh Shoukri following the awarding of an honorary doctor of laws degree to Sorbara during the 2013 spring convocation ceremonies

Julia Foster, chair of the Board of Governors of York University, and Mamdouh Shoukri, president and vice-chancellor, announced Monday that Gregory Sorbara has been appointed York University’s 13th chancellor for a three-year term. Sorbara will be officially installed as chancellor in June. As ceremonial head, Sorbara will serve as lead ambassador of York, preside over all convocation ceremonies and confer degrees.

“Greg has worked in the interests of the Greater Toronto Area and has contributed substantially to its infrastructure and financial growth,” says Foster. “His appointment builds on his commitment to and engagement with York University and its broader community.”

An alumnus of York’s Glendon College (BA ’78) and Osgoode Hall Law School (LLB ’81), and recipient of an honorary doctor of laws (LLD ’13), Sorbara’s experiences of both campuses give him a unique perspective on the value of a liberal arts degree combined with a professional degree and what it means to study at a bilingual university campus. Like many York students, he continued his educational journey as a mature student.

His public service career has enhanced the lives of Ontarians. He held numerous cabinet positions in the Ontario Legislature, including minister of finance, minister of colleges and universities, minister of labour & minister responsible for women’s issues, and member of the provincial parliament of Ontario representing Vaughan.

“We are proud to welcome Greg to our helm as a champion of postsecondary education and a longtime friend of York University,” adds Shoukri. “His legacy includes increasing accessibility for low-income postsecondary Ontario students through loans and grants, while investing in enrolments, expanded faculty complement, graduate scholarships and research.”

“My time as a student at York University helped transform me and define my life’s journey. I am thrilled and honoured to be appointed as chancellor,” says Sorbara.  “I am inspired by those preceding me in this esteemed role, most recently the Honorable Roy McMurtry, and anticipate with joy the part I can play in advancing the important work of the York community.”

The incoming chancellor will be installed at York University’s first Spring Convocation ceremony on Friday, June 13 at 10:30am.