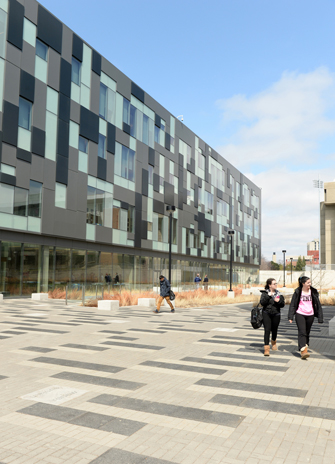 Green is the new red at York University.

On April 22, York University celebrated Earth Day with a host of green announcements at a special ceremony held in the Life Sciences Building on the Keele campus.

In front of an audience of more than 100 faculty members, staff, guests and students, York President and Vice-Chancellor Mamdouh Shoukri announced that for the second year in a row, York University had been named one of Canada’s greenest employers for 2014 by Mediacorp Canada.

“This consistent recognition of York’s global leadership in sustainability reflects the strong commitment of our students, staff and faculty to be green innovators,” he said.

The external validation, added Shoukri, serves to reinforce the University’s determination to continue to reduce its ecological footprint. “By succeeding in our efforts to be a university leader in sustainability, not only are we protecting the natural environment for future generations, but we are also saving the University money through more efficient use of resources, and that is money that can be put back into academic programming,” he said.

Shoukri also declared that Corporate Knights magazine had recently ranked York University second on its 2014 40 Future Responsible Corporate Leaders list. The good news continued with the announcement that the Life Sciences Building had received a Leadership in Energy and Environmental Design (LEED) Silver Designation. LEED is a rigorous set of rating systems for the design, construction, operation, and maintenance of green buildings.

“These awards honour members of the York community who have demonstrated outstanding and ongoing commitment to making our University one of the greenest universities in Canada, and indeed the world,” said Shoukri. “We are incredibly proud of their achievements.”

Shourki thanked the award recipients, students, staff, faculty members and researchers for their ongoing commitment to make York University a global leader in sustainability practice and research. He issued special appreciation to York Vice-President Finance and Administration Gary Brewer and to Richard Francki, assistant vice-president, CSBO and the CSBO team, for their work in sustainability. He thanked members of the President’s Sustainability Council for their volunteer work and the council’s outgoing chair, Faculty of Environmental Studies Professor Ilan Kapoor, for his leadership. He also thanked the University’s deans for their commitment to sustainability leadership in academic programming, teaching and research.

As master of ceremonies, Brewer delivered greetings on behalf of MPP Jim Bradley, minister of the environment. In his letter, Bradley noted that he was inspired by York University’s leadership in sustainability.

The celebration continued with a reading of a special poem composed for the event by York English Professor and poet Priscila Uppal, titled “Arbitration Recommendation”.

The event closed with a plaque unveiling by Faculty of Science interim Dean Don Hastie and Francki of the LEED Silver Designation for the Life Sciences Building. Hastie thanked the building’s faculty for their ongoing commitment to sustainability and the building’s planning committee and construction teams. All of whom, said Hastie, worked within a strict and precise series of LEED guidelines in order to achieve the prestigious silver designation.

Hastie’s comments were augmented by Francki, who outlined the technical innovations in the building, some of which include a white roof to reduce the heat island effect, low emission finishes, bicycle parking racks, showers and change rooms for cyclists, and a bubble deck floor that reduced the need for huge amounts of concrete.

For more information on York University’s commitment to sustainability and the environment, visit the Sustainability @ York website.