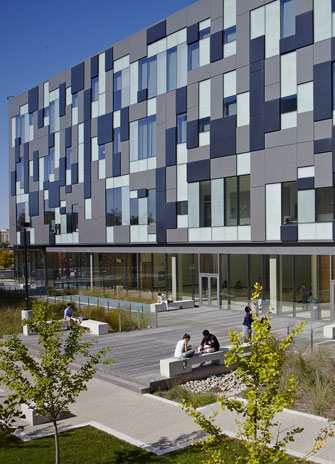 On Tuesday, April 22 at 2pm, the York University community is invited to join York President and Vice-Chancellor Mamdouh Shoukri and Vice-President Finance and Administration Gary Brewer for an Earth Day Celebration in the Life Sciences Building.

The Earth Day event, which will take place in the lobby of the Life Sciences Building, will pay tribute to a number of sustainability champions and achievements across York’s campuses. The occasion will include the unveiling of a plaque to commemorate the LEED Silver certification of the Life Sciences Building, and an announcement about sustainability at York University. The event will also feature the presentation of the inaugural President’s Sustainability Leadership Awards.

Created to celebrate the many champions of sustainability at York, these new awards recognize students, faculty and staff who are contributing to making the University a leader in sustainability among postsecondary institutions. The President’s Sustainability Leadership Awards are intended to raise awareness of the important work that sustainability champions are doing at York, to provide much-deserved recognition of their work, and to encourage others to get involved in sustainability initiatives on our campuses. Up to five awards will be given out each year.

“I am very pleased to announce the first winners of the President’s Sustainability Leadership Awards,” said York President Mamdouh Shoukri. “These awards honour members of the York community who have demonstrated outstanding and ongoing commitment to making ours one of the greenest universities in Canada, and indeed, the world. We are incredibly proud of their achievements, and I look forward to the opportunity to honour them in person at next week’s event.”

This year’s winners of the President’s Sustainability Leadership Awards are:

Cochrane oversees York University’s Energy Management program, focusing on ensuring efficient heating, cooling and power for York’s 115 buildings and eight-million square feet of space. He has steered York’s five-year energy renewal plan, aimed at a 25 per cent reduction in utility consumption. His tenacious pursuit of energy rebates has provided dramatically more energy improvements than originally thought possible, specifically resulting in doubling financial incentive grants to the University. This has resulted in more than $1.5 million in additional funds, which are being further invested in new energy conservation measures. An outstanding professional and true steward of sustainability planning and practices, Cochrane is deeply involved with York faculty and researchers from Environmental Studies, Engineering and Science to explore common goals and potential partnerships.

A long serving York employee, Haagsma epitomizes sustainability in action. He is educated as an entomologist, a branch of zoology focusing of insects. This has served him well in his capacity as grounds manager, given the challenges that this area has faced with infestations, including the Asian Long Horn Beetle and more recently the Emerald Ash Borer (EAB). Haagsma was quick to act at the first evidence of EAB, developing a management plan to save as many Ash trees as possible. His work on the Ash tree inventory and audit led to a full tree inventory of both campuses. Haagsma is also an advocate for conscientious waste behavior, and has been a key player in the roll out of a comprehensive recycling program and organic waste collection program that has achieved a landfill diversion rate of over 65 per cent. He was an early advocate for sustainable landscapes, including xeriscaping. Haagsma has fostered excellent relationships with faculty, staff and students, and is a constant volunteer for initiatives to improve the campus environment.

Psathas works with many CSBO and York departments and divisions, and is a committed champion of the importance of sustainability in all development projects—from campus greening to reuse and recycling of material, energy conservation, and renewable energy concepts. She has contributed significantly to York’s corporate sustainability profile by participating in various committees and institutes, including the President’s Sustainability Council and IRIS Executive Board. Her participation in the York Master Planning and Facilities Committee allows her to ensure that the need for sustainable development is recognized and respected at the highest level of the institution. Psathas also stewards and supports environmental initiatives such as Lights Out, Campus Cleaning, YorkWise! and Res Race to Zero. She has personally managed a number of projects related to improving the greening of the campus, including Osgoode Green, the University Tree Inventory, and improvements within the Glendon forest. Her management of various sustainable transportation initiatives has resulted in York’s ZipCars and Smart Commute programs. Psathas has also been a champion of accessibility on campus, ensuring that new development projects recognize and respect the need to remove barriers to accessibility.

As a subset of Osgoode’s Environmental Law Society, the Sustainability Committee is run entirely through committed student volunteers who have gone well above the call of duty to create a more sustainable campus. The committee established five sub-groups to tackle the challenges that mattered most to students, and as such, has a very wide breadth and has significantly improved sustainability at Osgoode and the wider York community. The committee initiated a Food Advisory Group to discuss food sustainability and waste management with on-campus food providers, resulting in the reintroduction of Fair Trade coffee, reusable mugs and cups, and promotion of Aramark’s Vegan Mondays initiative. The committee also developed an Osgoode Campus Group, which led a to Lighting Efficiency signature campaign, established an e-waste bin in the Osgoode building, and created a double-sided printing poster beside Osgoode library printers to encourage students to save paper. Their events group has also worked to involve all students in programs to make campus more sustainable, including their Lug-A-Mug campaign and Fork Drive, in which students returned/donated metal forks, spoons and knives to the bistro. Overall, the Osgoode Sustainability Committee has made considerable contributions to the sustainability of Osgoode and the greater York Community over the past year.

The CSBO Planning and Renovations Unit has a longstanding commitment to green building as evidenced through early citations and awards. This 20-plus member group includes six LEED Accredited Professionals. Annually, the group undertakes approximately 200 projects ranging in scale, complexity and cost. Projects are undertaken with consideration to sustainable practices, starting with the most efficient means of delivering the project, including the reuse of existing materials, including lighting, as well as other passive green design strategies. Solutions include practices in energy efficient building systems to reduce energy consumption and minimize York’s carbon foot print, minimize waste and maximize resource deployment by focusing on every opportunity for reuse. There are many examples of the unit’s innovative thinking and practice on sustainable building, including the development of the Sherman Health Sciences Building, which saw the adaptive reuse of York’s old ice rink into a state-of-the-art, world-class research facility through sustainable strategies such as bringing natural light into the interior for energy savings, incorporating a high-albedo roof, landscaping with drought-resistant native plants and storm water runoff management. By re-purposing the arena, an incredible York facility was created, adding value to the campus and bringing new life to an old structure.