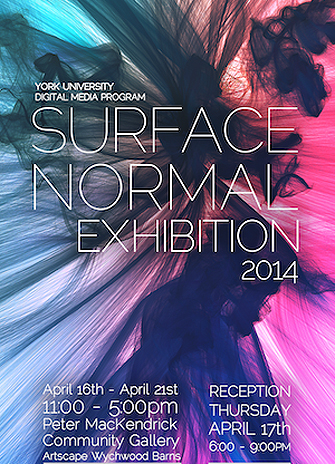 A game designed to annoy you. A musical score generated by movement. A robot that needs a helping hand.

These are just a few of the intriguing projects inviting viewer interaction in Surface Normal, a juried exhibition of works created over the past year by students in York University’s Digital Media Program, offered jointly through the Faculty of Fine Arts and the Lassonde School of Engineering.

The show is on view to April 21 at the Peter MacKendrick Community Gallery at Artscape Wychwood Barns in midtown Toronto. The digital media makers will be on hand to welcome the public at the opening reception this evening (Thursday, April 17) from 6 to 9pm and throughout the run of the exhibition.

Spin: Space Investigation, a game by Mauricio Galvez, Ryan Chang and Sandra Koo, follows a spaceship navigator on a mission to investigate the source of a roaming distress signal. The story progression is affected not only by agent behaviour and dynamic events, but also by the moral choices made by the player.

The expression of music and motion underpins two projects in very different ways. In the Key of C, devised by Nabil Babu and Chris Elcombe for a course in screen-based fluid interfaces, is a gesture-tracking system that generates a musical score that’s both visible and audible. The more dramatic the movement, the more music is created and visualized. Lego My Money, by Elcombe, Jeff Marchment and Victor Zohni, is a kinetic sculpture that compares the closing prices of the TSX and the average income of a Canadian household, and uses these two data sets to generate contrasting elements of music and motion.

Youhan Guan, Luke Li and Steele Xia are the team behind Descendants, an open-world sandbox adventure game that explores indirect human interaction and cooperation. The player takes the role of a human character in a complex virtual world, able to explore, build and destroy objects at will. When the player’s character dies, another player will continue the game as a new character in the same world. To ensure the human race as a whole survives and thrives, each player must help the next by leaving behind hints and clues in a self-invented language.

Conversation Siphon, by Youhan Guan and Rhys Mendes, explores surveillance, autonomy, sound and silence by means of a pair of drones that float around a space under helium balloons. One drone seeks out, records and transmits sounds wirelessly to its partner, which plays back the recorded sound in quiet areas that it finds.‎ By siphoning off sounds and shifting them across a space, the drones work together to equalize the room’s noise level.

The virtual reality interactive installation Nirvana, by Shengyi Li and Danning Lu, seeks to share with visitors aspects of traditional Chinese culture through the tale of the mythical phoenix and some concepts from Buddhism.

Aidan Waite’s Ratchet Racing is a telerobotic racing experience that invites Internet users to race a car or boat around a 3- by 4-foot track. Online observers can watch a fixed camera stream or control a camera-equipped robotic arm. The user’s commands are translated to radio messages that control the vehicles.

Whack It, But Don’t Crack It, created by Will Cook, Radi Hilaneh and Ghazal Jarouj, tests the player’s emotional control. Failure to keep calm signals the end of the game.

In creating LOLA, Lex Moakler, Ursula Sarracini and LaLaine Ulit-Destajo have boldly reversed the conventional understanding of human-robot relations. Lola the robot can carry out part of her task, but requires human assistance to complete it. All she can do is ask – and wait.

An overview of all 14 projects featured in the exhibition is available on the Fine Arts Digital Media Program website.

The works were selected for Surface Normal from the year-end Digital Media Showcase by Professor Petros Faloutsos from the Department of Electrical Engineering & Computer Science in the Lassonde School of Engineering and digital media Professor Michael Longford, associate dean research & planning in the Faculty of Fine Arts. The exhibition is co-presented by the Digital Media Students Association.

Surface Normal runs through Monday, April 21 at the Peter MacKendrick Community Gallery, Suite 177 (Barn 1) at 601 Christie St. (southwest corner of Benson and Wychwood Avenues). Gallery hours are 11am to 5pm. Admission is free.