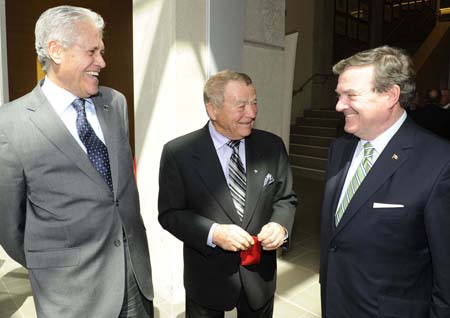 Osgoode Hall Law School at York University has lost one of its most accomplished graduates with the death of Jim Flaherty (LLB ’73). Mr. Flaherty died peacefully at his Ottawa home on April 10.

He was a third term Member of Parliament for Whitby-Oshawa (Ontario), first elected in 2006. Until March 2014, he served as Canada’s Minister of Finance and Minister Responsible for the Greater Toronto Area. He was one of Canada’s longest serving ministers of finance.

“We’ve lost one of the law school’s and the University’s most accomplished graduates, a dedicated leader and a fine human being,” said Osgoode Dean Lorne Sossin.

In 1970, Flaherty was a book-toting Osgoode student by day and a taxi driver by night.  He drove a cab three nights a week and during the summer to help pay tuition and kept his priorities straight. “It keeps you grounded when you deal with all kinds of folks who take taxis, especially on Friday and Saturday nights in Toronto,” Flaherty said in an interview in 2003 with Osgoode’s Continuum alumni magazine.

Flaherty attended the 40th reunion of the Osgoode Class of 1973 last October and was a great friend of the law school. He was a driving force behind the scenes, helping Osgoode to secure $25 million from the Federal-Provincial Knowledge Infrastructure Program for its 2010-2011 building renovation and construction project.

“Our government’s support for post-secondary education has not only made a difference in the short term, but has also set the stage for future prosperity,” Flaherty said. “The investment at Osgoode Hall Law School created jobs for people in Toronto at a critical time, while improving the infrastructure that the school will need to maintain its reputation as an advanced learning leader.”

Flaherty leaves his wife Christine Elliott, who serves as a Member of the Provincial Parliament for the same riding, Whitby-Oshawa, and their triplet sons.