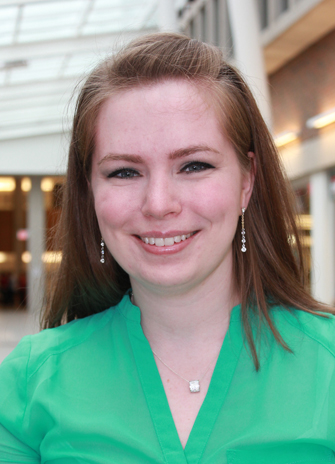 As York University nursing student Kerry Morrison knelt next to a semi-conscious, bleeding man on a subway platform and began applying pressure to his wounds, she didn’t think about anything except stabilizing him.

It was affirmation that she’d made the right career choice. Not that she doubted it, but the incident confirmed it. Her calling was to become a nurse.

The incident for which she is being awarded happened nearly a year ago as Morrison and her boyfriend, Anthony Ali, were returning from a shopping trip to the Yorkdale mall. When they entered the subway station, a girl ran past screaming that a man was dying on the platform.

Morrison and Ali ran to where a group of people had gathered and pushed their way through. There was a young man lying there on his back. “All I could see was a pool of blood coming out from his head,” said Morrison. “My nursing instinct was just to get in there and help the best that I could, and try and get him into a better situation for when paramedics and police arrived.”

The girl who had run past them earlier was with her mother and father, and together they had jumped down onto the tracks after the man had what is thought to be a seizure and fell. They lifted the then unconscious man back up onto the platform.

That’s when Morrison and Ali, who is also being awarded, came across the scene. “My boyfriend actually gave me the shirt off his back to help stop the bleeding.” She applied pressure to the wounded man’s head – he was bleeding heavily from a couple of spots – and tried to keep him still. “We were worried that there could have been some kind of spinal injury from falling onto the tracks the way he did.”

Ali held the man’s hand and talked to him to keep him calm, as Morrison tried to staunch the bleeding. She also talked to the injured man reassuring him that she was there to help, that she was a nursing student and more help was on the way.

“I knew what I had to do medically to put him into a stable situation for when the paramedics came,” she said. “I knew I had the skills at the time to help.”

She was pleased that even in an emergency she was able to handle herself in a calm and professional way, something she will need to draw on time and again in her chosen career.

It wasn’t until after the man was loaded into the ambulance that Morrison noticed she was coated in blood up to her elbows. But it was her quick thinking and actions, with no regard for herself, that made a difference.

This wasn’t the first time Morrison’s skills have been called upon. Before entering the nursing program at York, she was at another school when a fellow student passed out on the gym floor and went into convulsions with a candy in her mouth. Morrison immediately recognized the need to remove the candy so the student wouldn’t choke, and then moved her onto her side.

“It reassured me that I wanted to get into a career where I helped people,” she said.

Morrison, who thanks her parents for shaping her into the person she is today, will soon graduate from York’s School of Nursing in the Faculty of Health and start her career for real.

As far as she knows, the man on the subway platform recovered in hospital, one of the many people she will help in the years ahead.