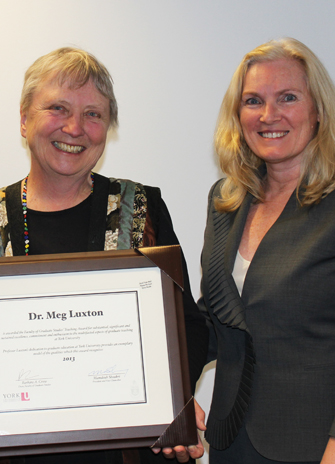 The Faculty of Graduate Studies (FGS) honoured Professor Meg Luxton for excellence in graduate teaching and mentoring with the Faculty’s Teaching Award at the Faculty Council meeting April 3.

Some 40 students, faculty and staff were on hand to see Luxton receive her award from Vice-President Academic and Provost Rhonda Lenton, who was representing York President and Vice-Chancellor Mamdouh Shoukri.

In introducing the award, FGS Dean Barbara Crow said that Luxton “played a significant role as a graduate program director.” She told members of the council that as a graduate student at York University in the 1980s, she had taken one of Luxton’s courses. “Her teaching was about how to make us better writers,” said Crow. “I see Professor Luxton as a really important mentor in the community.”

Reading from the citation crafted by FGS Associate Dean Academic Karen Krasny, Crow said, “since her appointment to York University as a tenured professor in 1984, Dr. Luxton has distinguished herself by an extraordinary commitment to mentoring graduate students through the rigours of academia with grace, compassion and a depth and breadth of knowledge that has established her as a scholar of the highest order.”

Lenton brought personal congratulations to Luxton from the University’s president and spoke to Luxton’s reputation and importance to the areas of gender, feminism and women’s studies. She emphasized that Luxton exemplified the criteria for the award, which “recognizes teaching and supervisory excellence. Other elements that are taken into consideration include scholarly, professional and teaching development and initiatives in graduate program and curriculum development.”

Luxton is a professor in the School of Gender, Sexuality and Women’s Studies and the former director of the Graduate Program in Gender, Feminist and Women’s Studies and of the Centre for Feminist Research. Her research focuses on sex/gender divisions of labour, feminist theory, especially feminist political economy, women’s movements in Canada and globally. Luxton also works with feminist organizations and unions, documenting a range of organizing efforts such as union women in non-traditional jobs, workers organizing in unions and in their communities, wives supporting their husbands’ unions during strikes, links between the labour movement and the women’s movement. She has published widely on the women’s movement in Canada and internationally, women’s work, paid and unpaid, and relations among work, family and class. Her current research examines the impact of social policy on informal care-giving practices and the relative economic security or precariousness of older immigrants.

“It’s lovely to be recognized this way,” said Luxton. “I really appreciate the students who nominated me. I appreciate these kinds of awards because we don’t recognize each other often enough.”

Gender, Feminist and Women’s Studies PhD student Lisa Sandlos, one of two co-nominators of Luxton, said in her nomination that “Dr. Luxton is an artist of teaching at the graduate level because she embodies three qualities that I consider to be “artistic”: vision, presence and momentum.” Her co-nominator and PhD student colleague Terri Hawkes added that “Dr. Luxton stands out for her unique and memorable classroom teaching skills, her tireless dedication in supporting both teachers and students as a Graduate Program Director, and her quiet and unheralded work as an extraordinary mentor.” Another student, Francesca Dall’Acqua, a PhD Candidate in the Feminist and Women’s Studies Program said, “Dr. Luxton has been and still is an extremely significant presence for me, from both a more personal point of view and from a strictly academic one.”

The accolades from her colleagues and former students were just as effusive. Vicki Van Wagner, currently an associate professor in Ryerson’s midwifery education program and a former student of Luxton’s said, “Meg’s work as a scholar has been most inspiring in its engagement with social justice and politics both nationally and internationally. These commitments infuse her teaching and draw students into envisioning that their work matters in a world much broader than the university. Her teaching style asks students to become critical, involved and responsible world citizens.”

Carleton University Professor Susan Braedley said, “In my life, Meg has been a transformational teacher and mentor.” She added, “As a teacher of the graduate seminar in the History of Feminist Thought, Meg was one of the best prepared, organized and intellectually stimulating instructors I have ever experienced. Her syllabus was meticulously prepared and intellectually interesting, proving over time to be an invaluable reference guide to feminist thought as well as a course manual.”

The Graduate Studies’ Teaching Award is bestowed annually on a member of the Faculty of Graduate Studies who has displayed substantial, significant and sustained excellence, commitment and enthusiasm to the multifaceted aspects of teaching at the graduate level at York. The award recognizes teaching and supervisory excellence. Other elements which are taken into consideration include scholarly, professional and teaching development and initiatives in graduate program and curriculum development.