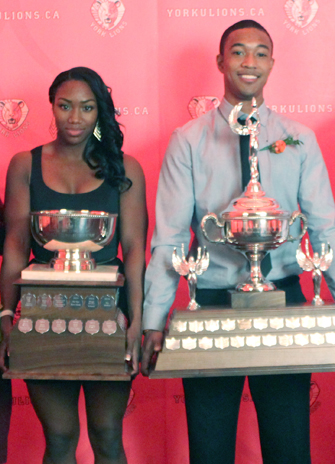 Richards-Kwok, who also earnedYork’s top honour in 2012, becomes just the third repeat winner of the award since its inception in 1969, joining fellow track & field athlete Doug Wood (1992, 1994) and basketball player David Coulthard (1980, 1982). He is the third straight athlete from the track & field team to be named the male athlete of the year, while Bingham’s honour made it two in a row for the squad.

Also receiving major awards at the event were Umar Khan of the men’s track & field team, who took home the Charles Saundercook Memorial Trophy, and Aisan Fazeli of the women’s rugby team, who took home the the Bryce M. Taylor Award. Jonathan Lao of the men’s soccer team and Sonia Glushkovsky were named the top rookies of the year. Lions Track & Field Head Coach Colin Inglis earned his second straight coach of the year award.

Richards-Kwok cleaned up at the Canadian Interuniversity Sport (CIS) championships in Edmonton, winning four individual gold medals in the 60 metre, 300 metre, the 4 x 200 metre and 4 x 400 metre, and adding a fifth by leading the Lions to their first team title since 1984. He was named the CIS championship most outstanding performer for the second time in his career (2012) an also the Ontario University Athletics (OUA) track events most valuable player for the second time (2011).  Richards-Kwok won a pair of gold medals in the 60 metre and 300 metre at the OUA championships and tied a 31-year meet record in the 60 metre. At the McGill Team Challenge, he won two gold medals and broke the meet record in the 60 metre. Richards-Kwok was named the CIS athlete of the week once and the OUA athlete of the week twice and earned first-team CIS all-Canadian and OUA all-star honours. He leaves York University as the most decorated track and field student-athlete in program history, winning 14 CIS gold medals in his five-year career, 10 of them gold.

Khan is the first Lions Track & Field student-athlete to claim the Charles Saundercook Memorial Trophy since triple jumper David St. Bernard in 2008. The award is presented to a male athlete within the men’s interuniversity sport program who best exemplifies the qualities of perseverance, sportsmanship, enthusiasm for life and the consideration of others. In his five years at York, Khan has become one of the most recognizable student-athletes on campus. He is a two-time CIS bronze medallist and a three-time OUA medallist in the shot put, and this year helped the Lions win the national team title. Away from the throwing circle he is a student-athlete mentor in the PAWS program and a familiar face at the Client Services desk in the Tait McKenzie Centre. He represents one of the best examples of YU pride, regularly leading cheers at meets and supporting his teammates and competitors, and has also blossomed into a strong student in the classroom and now has his sights set on attending law school.

Fazeli is the first women’s rugby player to earn the Bryce M. Taylor Award, which is presented to a graduating female student who has, throughout her undergraduate years, made outstanding contributions to interuniversity sport at York University. Fazeli has been a tremendous ambassador for the York Lions in her four years with the program. She has been the team captain for two years and this season was named an OUA Russell Division all-star after finishing 13th in OUA scoring despite playing with a broken nose. She also earned the sport’s community service award for her stellar contributions to the York community. This season alone she has worked with Toronto Police Services to run an after school program for at-risk youth, organized the rugby team to produce and hand out 200 lunches to the city’s less fortunate, organized a blood drive for the Lions rugby and football teams, promoted safety awareness with the distribution of York’s Good Neighbour Guide, and assisted at York’s high school tournament to raise money for the Umbrella Foundation. In the past she has also organized various activities for cancer research fundraising.

Inglis is the first repeat winner of the award since its inception in 2011. This season he earned his first CIS coach of the year award after leading the men’s track and field team to the CIS banner, the first since 1984. In addition, he oversaw a significant improvement by the women’s team, which moved up three places and scored 28 more points than last season. Inglis also brought in a strong new class of Lions this season, with 10 of the 26 student-athletes who competed at the CIS championships in Edmonton new from last year.

Lao is the second straight men’s soccer player and third in the last four seasons to earn York’s top male rookie honour. He was one of the best players in the country this season in just his first year in the league, finishing second in OUA scoring and earned the OUA and CIS rookie of the year awards. He was also named the OUA West’s MVP, an impressive feat for a first-year player, and earned first-team OUA all-star and CIS all-Canadian honours. Lao scored the winning goal in the OUA semifinals that qualified the Lions for the CIS championships, helped the squad claim its first OUA title since 2007 and went on to earn national tournament all-star honours in Fredericton, where the Lions finished in fourth place.

Glushkovsky, of Richmond Hill, Ont.,is the first tennis player to be named York’s female rookie of the year. This season she was named the OUA rookie of the year after reaching the singles final in the fifth flight at the OUA championships, becoming the only rookie to reach a final at the year-end event. Her play helped the Lions win the conference team bronze medal.