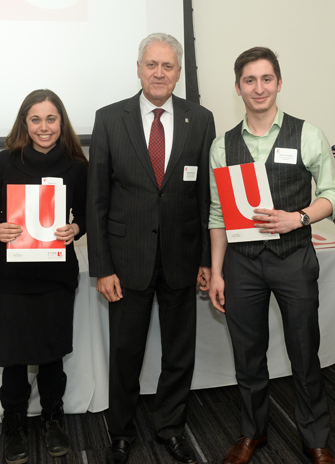 York University celebrated the academic excellence of some of its best and brightest, current undergraduate and graduate students during its annual Circle of Scholars reception on March 26.

York President & Vice-Chancellor Mamdouh Shoukri attended the event, which took place in the Kaneff Tower on York University’s Keele campus. He delivered the keynote address and congratulated the student scholarship recipients on their success. Some 90 guests attended the celebration, including graduate and undergraduate students. Janet Morrison, vice-provost students, and senior members of the University’s academic team, including deans and faculty were at the event.

“As president, there are two things that I really take pride in doing,” said Shoukri. “One is talking about how great our University is, and two is recognizing and honouring the excellence of our future students. .If you look around the room you’ll see that you are surrounded by Ontario’s high school leaders — people like you who have excelled in academics, athletics and extracurricular activities. Congratulations, this is an incredible achievement for which you should all be proud.”

He outlined the results of a recent report from Statistics Canada that identified a university degree as “the investment of a lifetime.” The report, said Shoukri, found that graduates of bachelor’s degree programs cumulatively earn more than $600,000 more than high school graduates between the ages of 35 and 54. The choice to study at York U, he told the students attending the Circle of Scholars reception, was one of the best decisions they could have made.

“Now more than ever, York is attracting and retaining the best and brightest from across Canada, and beyond,” he said. “More and more students are choosing York as their first university of choice because we are one of Canada’s leading research and teaching universities.”

Shoukri told those present that he truly believes that York University has the best students, faculty, staff and alumni and that the University community is rich in diversity. “This diversity will expose you to different views and ideas, allowing you to open your mind and grow as a person so that you can become a global citizen.”

He then encouraged every student at the reception to embrace their time at York University and take advantage of the opportunities present on campus. He spoke about the third annual President for a Day event on March 19 during which Shoukri switched roles with Emanuel Ebrahim, a third-year student in the Faculty of Health. “The winner of the contest, Emanuel Ebrahim, is a Kinesiology Honour Roll student who volunteers in research labs, with the York UNICEF club and other student groups, and is remarkably poised and driven to build school spirit and enhance the student experience at York,” said Shoukri. “I think Emanuel is representative of many of our talented, hard-working students, and an example of how the student experience at York University is more than an education. With his full and varied schedule and activities, this is a student who is getting as much out of his time at York as possible.”

Shoukri closed his remarks by urging current and future students to embrace their University experience.

The Chancellor Bennett Entrance Award for the Westview Partnership

The Chancellor Bennett Entrance Award for the Westview Partnership