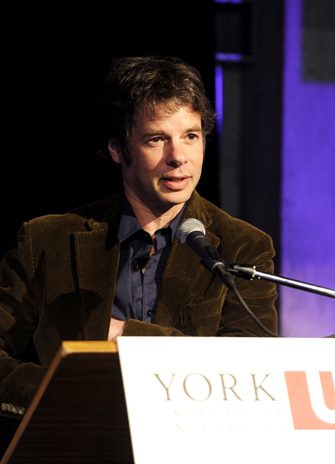 York Creative Writing Program alumnus and award-winning playwright Jason Sherman (BA ’85) told the winners of the President’s Creative Writing Awards that their work “made an immediate connection to someone and that’s a good thing. That’s a thing worth relishing and a thing to strive for…”.

What is less certain is what’s ahead, Sherman said, who talked about some of his professors in the program and what he learned.

In one of his courses, Professor bpNicol gave them an in-class writing task and then told them to cross out all their favourite lines and words. “Kill those brilliant lines. I couldn’t believe it. These were brilliant lines we’d all written, right? Maybe not.” He realized later it was “shock therapy for those who felt precious about our work. It was the first clue that writing is rewriting, that it’s work, that it’s hard, that it’s a craft, that it takes dedication. All that from one little exercise.”

After getting his degree at York, Sherman stayed in Canada to help “make theatre in this country an important part of the fabric of our lives”. His play, Three in the Back, Two in the Head, won the Governor General’s Literary Award for Drama in 1995. The League of Nathans (1992) won a Floyd S. Chalmers Canadian Play Award (1993) and was nominated for the Governor General’s Award for English language drama. After some 15 years of playwriting, Sherman said he “decided to make a living”.

He has since written for radio and television, including the CBC Radio series Afghanada and the television series Bloodletting & Miraculous Cures and The Best Laid Plans.

As York’s creative writing students learn the craft, they are proving to be a talented group. It was a difficult year for the judges of the President’s Creative Writing Awards to decide on one clear winner in several of the categories.

Kudos on their work came from President & Vice-Chancellor Mamdouh Shoukri, who congratulated all the winners, praising them for their creativity. “This is a very inspiring group,” said Shoukri. “These awards are an opportunity to highlight the hard work and creative output of our outstanding students, whose efforts exemplify the spirit of innovation and excellence for which York is known. These talented student winners truly are the voices of tomorrow.”

Dean of the Faculty of Liberal Arts & Professional Studies Martin Singer recounted to the group a story about Pulitzer Prize-winning author Annie Proulx, who before becoming a writer was a graduate student at what is now Concordia University when Singer was a young assistant professor there. He recalled that after she completed a doctoral field in traditional Chinese history with him, they lost contact.

It was only years later when he received a call from a Boston reporter that Singer learned what she had been up to – she had become a writer who had earned critical acclaim. When she returned to Montreal to accept an honorary degree from Concordia, her message to graduating students was in part that “creative writing can come from many aspects of your training and experience,” said Singer.

Creative Writing Program coordinator B.W. Powe told the group that creative writing students “are among the most motivated and inspired of all students he’s ever seen”. They have chosen one of the most challenging professions, but one in which they will know they have lived deeply.

Stage Play
Luke Reece for Definition and Devon Bain for The Porch.

The following awards were presented by York’s Creative Writing Program in the Department of English, Faculty of Liberal Arts & Professional Studies:

The Judith Eve Gewurtz Memorial Poetry Award was established and presented by York humanities Professor Margo Gewurtz in memory of her daughter Judith, honouring the best poem by a creative writing major who is completing their third year of study.

The Babs Burggraf Award in creative writing offers financial assistance to a fourth-year student majoring in creative writing with proven talent and achievement in the area of short story writing. Faculty members in the program nominate students who have submitted short stories as part of their academic work for the session.

The Stanley Fefferman Prize is awarded for the best all-round achievement in the second-year Introduction to Creative Writing course and for the best original portfolio of coursework.