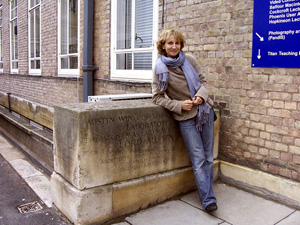 The 2013-2014 STS Seminar Series comes to a close with an exciting talk by University of California (Los Angeles) Professor Soraya de Chadarevian from the Department of History and the Institute for Society and Genetics. Her presentation will take place April 1 in 320 Bethune College from 12:30-2pm.

Her talk, “Following Chromosomes: Human Heredity in the Atomic Age”, will explore the genetic practices that developed in response to concerns of the atomic age such as low-dose irradiation experiments and human chromosome analysis, as well as on the changing culture of biological research that accompanied the rise of biotechnology in the 1970s.

de Chadarevian has a joint appointment in the Department of History and the new Center for Society and Genetics. Her main area of interest concerns the history of the biomedical sciences from the 19th century to the present, with special interest for the period after World War II. She has a background in biology (degrees from the University of Bologna, Italy and the University of Freiburg, Germany) and philosophy (PhD, University of Konstanz) as well as in the history of science and, among others, has held fellowhips at the Walther Rathenau Program and the Max Planck Institute for History of Science in Berlin; at La Villette in Paris; at the Hamburg Institute for Social Research and at Churchill College Cambridge.

She is interested in the material practices of the biomedical sciences and the place of these sciences in the broader culture as well as in historiographical issues. She has worked extensively on the history of molecular biology and the complex cultural processes that participated in the development of the new science after World War II. Her publications on this topic include the monograph Designs for Life: Molecular Biology after World War II (Cambridge University Press 2002); the exhibition catalogue Representations of the Double Helix (Whipple Museum 2002); the co-edited volume Molecularizing Biology and Medicine: New Strategies and Alliances, 1910s-1970s (Harwood 1998); as well as numerous articles in books and journals. Other recent publications include the co-edited volume Models: The Third Dimension of Science (Stanford 2004).

Currently she is studying the ways in which the biological sciences participated in and profited from the developments and concerns of the atomic age. She is also pursuing a research project on the changing culture of biological research that accompanied the rise of biotechnology in the 1970s. She will be teaching courses on genetics and society and related issues in the Center as well as more general history of science, technology and medicine courses in the Department of History.

The 2013-2014 Research Seminar Series in Science & Technology Studies explores the roles of instruments and media as investigators of organic worlds at various scales and in various settings. The sites of these experimental investigations are examined to highlight the social roles, scenes and the actors engaged in these inquiries.

For the full calendar, visit the the Research Seminar Series in Science and Technology Studies website. The STS Seminar Series is sponsored by Situating Science Cluster Grant, iSTS, Department of Natural Science, Faculty of Fine Arts, Faculty of Liberal Arts and Professional Studies, Faculty of Science, Bethune College, and the Canadian Research Chair in Sustainability and Culture.

The seminar is free and open to the public.